News WeekOcean Club Party
Home News “But as it stands, #nonbinary people are not allowed to fly”, Mother... 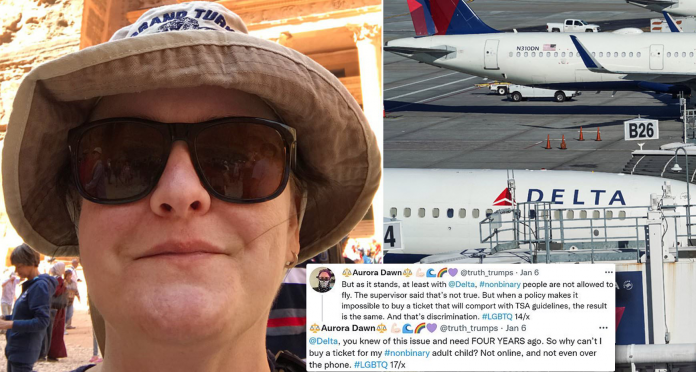 According to reports, the 52-year-old mother from Arizona is calling out Delta Airlines after saying she was unable to buy a plane ticket for her non binary adult child. The woman said this is because the airliner only offering male or female gender options in their booking process. “Delta is discriminating against #nonbinary individuals and not allowing them to fly despite legal ID issued by states that allow X on birth certificates and state-issued IDs.” the woman reportedly said.

Her 21-year-old child is nonbinary, meaning they identify as neither exclusively male nor female, and they have an “X” gender marker on their birth certificate and Washington state driver’s license, according to reports.

The 52-year-old woman, Dawn Henry, reportedly said she was trying to buy a surprise plane ticket for her adult child when she discovered Delta only provides male and female gender options.

Henry said she is frustrated by the situation and hopes speaking out will spark changes across the airline industry.

“I am committed to fixing this, not just for my child, but for everyone who holds legal ID with an X gender marker. My hope is that pressure on the airlines (not just Delta, but the others that have not updated their systems) will get this done.”

After the 52-year-old woman reached out to Delta about its lack of gender options, a Delta supervisor pointed her to the company’s policy, which only recognizes male and female genders., according to reports.

The 52-year-old woman then tweeted:

“But as it stands, at least with @Delta, #nonbinary people are not allowed to fly. The supervisor said that’s not true. But when a policy makes it impossible to buy a ticket that will comport with TSA guidelines, the result is the same. And that’s discrimination.”

“Gender identity is protected under the Civil Rights Act. How is @Delta’s disparate treatment in refusing to issue a ticket with the correct TSA-required legal #nonbinary gender marker legal?” the woman also said, according to reports.

“Delta Air Lines is a proud, long-time supporter of the LGBTQ+ community and we understand that being seen and acknowledged is part of having an equitable travel experience. While we quickly shifted focus due to COVID in early 2020 to helping customers navigate the rapidly changing environment and government regulations, we are back on track to be able to offer a non-binary gender option in our booking systems in 2022.”

The 52-year-old mother said she is not seeking legal action against Delta.

“I am glad they are finally promising to follow through on a commitment they made four years ago, but a promise is not enough. I will not stop pursuing this until every U.S. Airline with a discriminatory reservation system has made the long-overdue changes.” Henry said.