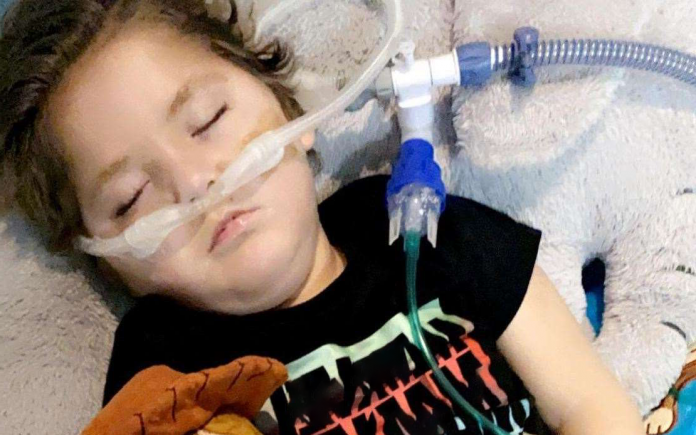 The five-year-old boy is still fighting for his life after contracting Covid-19, even though the doctors told his mother last week that he was unlikely to pull through. The 5-year-old boy, who also has a rare condition known as Vici syndrome, initially began displaying symptoms of fatigue before eventually deteriorating. He tested positive for Covid after he initially began experiencing symptoms on November 21.

The 5-year-old boy, Little Rupert Moore, was taken straight to the QEQM Hospital so they could monitor his symptoms before being rushed to intensive care on Wednesday, Nov. 24.

His 28-year-old mother, Mum Camilla Crick, said that the doctors told her that her son was unlikely to make it over the next 48 hours last week. But, the mother insists her son is fighting through the illness.

The 28-year-old mother also said: “On Sunday, my partner got a message from work saying four people had tested positive for Covid and that same day, I had an email from my daughter’s nursery saying someone in the class had also tested positive so we all took tests.

We all tested positive apart from my eldest, so I called up our local hospital who already knew of Rupert as he’s on an intensive care plan and they told his dad to take him in. On Monday, I found out he had deteriorated overnight and he began struggling to breathe. On Wednesday, the doctors told me he’s in a really bad way and wasn’t responding to antibiotics and there wasn’t much more they could do.”

The boy’s parents then rushed him to the children’s hospital for intensive care. The boy’s mother said that her son is fighting so far and he’s making small improvements. She also said that Moore can open his eyes now and the infection is slowly clearing but it’s going to be a long process.

The 5-year-old boy was diagnosed with Vici syndrome in 2017 and his parents were told by experts that he wouldn’t make it to see his fourth birthday. According to reports, his condition means he is unable to talk, is registered blind, is unable to eat and suffers from epilepsy.

His mother also said that despite his condition, the 5-year-old boy does everything with them and is more than capable of coming on days out and holidays with the family.

“I wanted him to be treated like any other normal child which is why I decided to put him in intensive care because I knew he wasn’t ready to go. He’s happy all the time; everyone who meets him loves him because he has such a big personality.” she said.

The family are fundraising for accommodation whilst the boy is in hospital. You can help them by visiting their JustGiving Page.