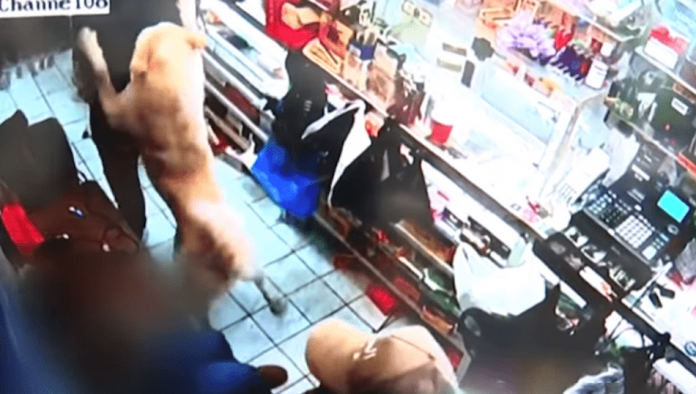 No one could have expected the outcome of a gun battle between a corner store clerk and two would-be armed robbers. The hero that saved the day was actually a brave dog. And the store’s manager credits his dog for not only saving his life but also the clerk’s during the terrifying confrontation.

According to reports, the two culprits entered the Big A corner store in Pennsylvania earlier this month with the intention of robbing the convenience store.

The security video camera captured the two rushing in early that morning and making their way to the back of the store, holding the clerk at gunpoint.

“Two people come in with a big gun and a small gun. They come straight up to all the way here with the gun at the girl’s head and my head. They say don’t move,” recalled the store’s manager, Sammy Aloubehi.

He noted how one of the suspects pointed their gun at his 32-year-old clerk, who was sitting on the couch, as soon as they noticed her.

“It happened right here. He coming straight out with the gun. The girl, she was here. The bullet is right here. It was almost at her head,” shared Aloubehi of the terrifying situation.

The incident could have turned deadly had his dog Bullet not intervened at that moment. Apparently, Bullet surprised the suspects by jumping all over the suspect and obstructing his aim.

This delay, allowed the clerk to take out a gun and fire at them. “If he didn’t move the guy and cover him, he would shoot the girl before she shoot him.

He did help,” noted Aloubehi who will forever remain grateful to his pooch. The dog’s sudden arrival caught the first suspect off guard but he somehow managed to fire his gun before fleeing the store frantically.

Soon after this, the second suspect shoots at the clerk several times leaving behind bullet holes on the wall and the couch. Unfortunately, some of them hit the employee four times who is currently being treated at the hospital.

Aloubehi assured the outlet that she is doing well. Thankfully, the owner came out of the altercation unharmed, and he thanks his pet for this. “He saved my life and her life,” he expressed.

Cops managed to recover a weapon at the scene that had been accidentally left behind by one of the suspects. However, no arrests have been made yet.