News WeekOcean Club Party
Home News “I don’t want another parent to be in this situation”, Toddler, who had... 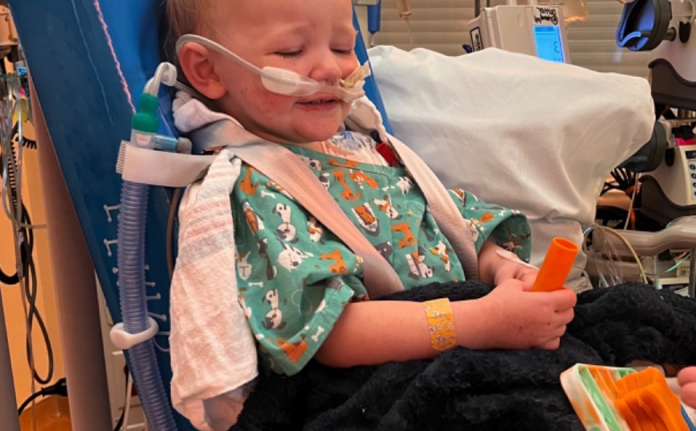 The 2-year-old girl, who now faces two months in hospital and a year-long recovery, received a life-saving transplant just months after her baby sister died from SIDS (Sudden Infant Death Syndrome – sudden, unexpected and unexplained death of an apparently healthy baby). After the life-saving surgery, doctors told the toddler’s mom that her daughter tested positive for adenovirus in her blood, which is a type of virus that ordinarily causes stomach upset and cold-like symptoms. The family now hopes that by sharing the baby’s story, they can help other families avoid the same fate.

According to the girl’s mother, Kelsea Schwab, the 2-year-old child from South Dakota, Baelyn, fell ill on April 22 with hives and received the life-saving liver transplant on May 5, the CNN reports. When the mother spotted her daughter’s symptoms last month, she wasn’t too worried, because the toddler suffers from allergies. But, she took her to the doctor anyway. “Just to be safe,” the mom said.

Unfortunately, the young girl was sent home with allergy medication. The little girl woke-up with yellow eyes the next day. Baelyn’s condition quickly deteriorated after she was brought back to hospital. The girl and her mother were flown to the prestigious M Health Fairview Masonic Children’s Hospital in Minnesota. Baelyn’s condition continued to decline.

According to the Daily Mail, the levels of ammonia in her liver crept dangerously high, to 109. According to the doctors, that is well above a healthy level of 25 to 40, suggesting to doctors that the organ was failing.

Dr, Chinnakotla told the mother that her daughter had gotten so sick they feared she was on the verge of falling into a coma and suffering permanent brain damage or a painful death. Luckily, the hospital officials scheduled a liver transplant for the toddler just two weeks after she first fell ill.

A donor liver from an unidentified 16 year-old who died in Texas was found shortly afterwards.

During an interview with CNN, the girl’s mother reportedly said: “Her eyes didn’t look like they were attached to her head anymore. They were just rolling all over. She would still ask for bananas and ask for juice and ask for snuggles, kind of like she’s still there, but not really.

Slowly watching her deteriorate like that, like her muscles, she would start shaking, and she had a hard time sitting up, and she couldn’t hold her head up, and just watching her go through that was like, “This is not my kid.” Like, am I ever even going to get her back?”

After the life-saving surgery, the doctors told the mother that her liver had been badly damaged. After the surgery, the little girl wasn’t yellow anymore, the mom said.

The medical personnel told the mother that Baelyn is recovering well.

Kelsea Schwab told Daily Mail: “I think we tried our hardest to make sure we were sleeping. We definitely have not slept or ate since the transplant, just anticipating that something bad is going to happen or has happened.”

The doctors also told the girl’s mother that her daughter tested positive for adenovirus in her blood but not in her liver tissue, CNN reports.

According to the health officials, adenovirus is a type of virus that ordinarily causes stomach upset and cold-like symptoms. It has never before been linked to liver failure in otherwise healthy children.

It remains clear whether the virus could be directly damaging the liver or setting off an unusual immune response that’s causing the body to attack its own tissues.

Baelyn and the rest of her family contracted COVID shortly after attending her baby sister’s Laramie, funeral in December 2021. Researchers are willing to perform antibody tests on child hepatitis sufferers, to see whether COVID shows up in their systems.

Baelyn’s mom now hopes that by sharing her daughter’s story, she can help other families avoid the same fate.

During an interview with CNN, the mother reportedly said:

“I really want to spread awareness about this because I don’t want another parent to be in this situation. It’s terrifying. It’s horrible. It’s dramatic. And not very many families can handle the strain that this puts on them and emotionally, physically, mentally, financially.”

The family has launched a fundraiser to raise money for medical expenses and share updates on the girl’s condition.

According to the health officials, Baelyn is part of a nationwide investigation by the US Centers for Disease Control and Prevention into recent cases of sudden severe hepatitis in 109 children in 25 states and territories. Health officials said that there are 340 more children with similar cases around the world.