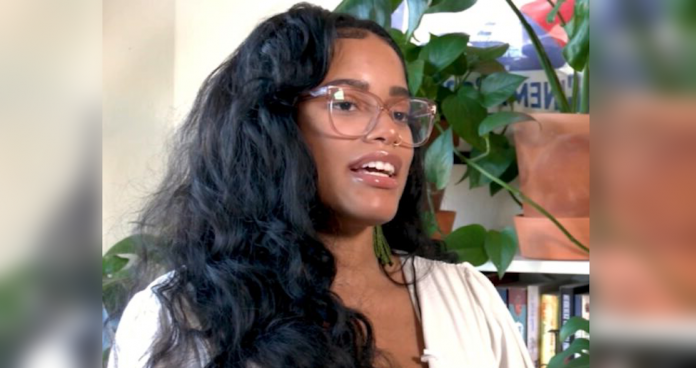 The Black woman claims she was discriminated against after a flight attendant made her move to the back of a plane to make room for two white women during a recent flight. The woman was on a returning flight after visiting family when she was abruptly asked to move to a seat at the back of the plane to satisfy two white passengers. “I don’t want to make it a race thing, but instead of asking the two white women that were seated next to me, in an attempt to accommodate them, they basically made me have to move.” she said.

Camille Henderson says she was on a returning Delta flight to California after visiting family in Georgia when she was abruptly asked to move to a seat at the back of the plane to satisfy two white passengers.

Henderson claims she was sitting near row 15 window during the Feb. 3 flight when the women, who were sitting in the aisle and middle seats in the row next to her, said they had first-class tickets, ABC7News reports.

“They felt like they were ticketed first-class seats, but they couldn’t provide the tickets.”

The white women would not let up, and succumbing to their demands, the Delta flight attendants offered a solution that would end with Henderson being pushed back to the very last row of the plane.

While Henderson was trying to sleep, a flight attendant came back and asked her if she could move to give the two women more room.

Henderson reportedly recorded part of the exchange between the women and a flight attendant.

She also said that flight attendants then came up with a solution to give the women more space at her expense, which Henderson described as a form of white privilege.

“Are you flying by yourself? There’s a seat back there in aisle 34. It’s an aisle seat.”

Henderson said that she felt embarrassed and fearful of retaliation. She also felt outraged as to why crew did not ask the women to move themselves. She eventually agreed to go to the back row.

“I don’t want to make it a race thing, but instead of asking the two white women that were seated next to me, in an attempt to accommodate them, they basically made me have to move.

I just don’t know why I had to move because that was the seat that I paid for, that was my assigned seat. As I’m walking back there it’s just humiliating. It’s like having the entire flight look at you and asking what’s going on.”

“We are looking into this situation to better understand what happened. Delta has no tolerance for discrimination in any form and these allegations run counter to our deeply-held values of respecting and honoring the diversity of our customers.”

Henderson said that she will never fly Delta again.

“Me, as a Black woman, I was displaced to make two white women comfortable. That doesn’t make any sense to me. I’m not looking for anything from Delta.

I’m not looking to be compensated. It’s just a simple acknowledgement of a situation that they put me through that made me feel dehumanized.”