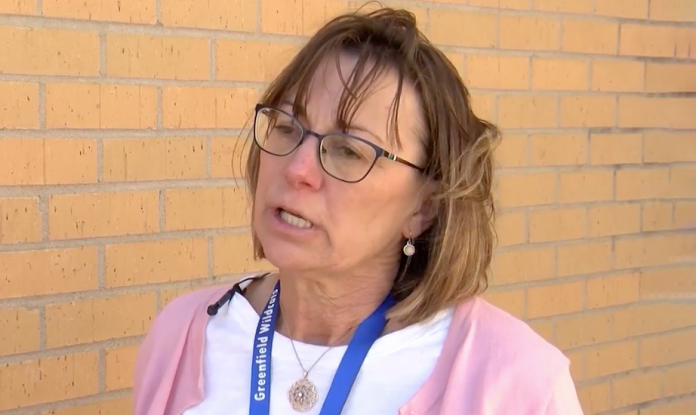 The english teacher says the local school board recently voted to not renew her contract after parents became upset about a self-awareness worksheet that the educator passed out and assigned to students. The worksheet asked students how racially privileged they are using true or false questions. Students would then count how many times they answered true. This was meant to get students thinking before reading, the teacher said. The high school teacher, who started out as a substitute teacher, reportedly lost her job after being accused of using critical race theory in the classroom.

The english teacher from Missouri, Kimberly Morrison, told OzarksFirst that the school board for the 400-person district voted last month to not renew her contract.

The woman said that she was called into the principals’ office in February after she assigned students a 15-question worksheet titled “How Racially Privileged Are You?” for the novel “Dear Martin.”

Several cities in the country have banned the use of “Dear Marin” in schools, per reports.

The teacher said she found the worksheet online and it was not used for grading or discussion purposes. She also said an administrator talked to her about concerns regarding the worksheet. She explained it was a self-awareness worksheet. Administrators reportedly told the teacher weeks later there were still concerns about the worksheet.

According to Morrison, the worksheet asked students how racially privileged they are using true or false questions. Students would then count how many times they answered true. This was meant to get students thinking before reading, the teacher said.

Kimberly Morrison reportedly said: “That first meeting, when she showed me that she had a copy of the handout and she wanted to know the context, she said the people she’s hearing from said that this is CRT. I said ‘Well, it’s not CRT. I don’t know what CRT is because I didn’t go to law school and we didn’t cover it in grad school. This isn’t it.”

According to Merriam-Webster, critical race theory teaches that racism pervades society and is fostered and perpetuated by the legal system.

Kimberly Morrison also said: “I said discussing racism is not critical race theory and she said she understood but that this is what she is hearing.”

The english teacher also defended the worksheet and said she reportedly bought it from an instructional database.

Morrison also said that she used the worksheet to prepare students for the conversation that was going to happen between two characters that we were about to read.

Superintendent Chris Kell reportedly said: “I would think at this point it is a done deal. It was a board vote. They are the ones that do the hiring, the non-renewals. It was their vote.”

Superintendent Kell also said that if a teacher is not renewed for employment, they can request a statement about the reasons behind the decision.

The english teacher said that she would teach the book again, but she will not use the worksheet that led to her losing her job.

“I would’ve spoken to students or parents about the issue. I would’ve told them firsthand how this fits into what was happening in our class.” the teacher said.

She will continue to teach at the high school through the end of the year. She said her last day with the students is when the current school year ends.