News WeekOcean Club Party
Home News “If this is caught early, it is very curable”, Young woman, who lived... 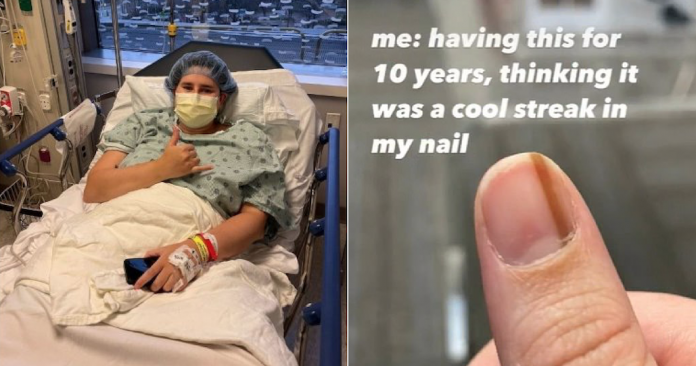 The 25-year-old woman said that she developed a line on her thumbnail when she was a teenager. She thought the streak under her thumbnail was nothing to worry about. But, after having it for 10 years, she discovered that she actually had a rare form of melanoma. She posted a video on her social media account revealing her unusual diagnosis. “I had seen doctors. I was in and out of doctors’ offices all the time. I was an athlete, so I was getting physicals every year. No one really noticed it until one time a doctor did notice it.” the young woman said.

The 25-year-old woman from Virginia, Maria Sylvia, posted a video on her social media account revealing her unusual diagnosis.

During an interview with Newsweek, the 25-year-old woman reportedly said: “I had seen doctors. I was in and out of doctors’ offices all the time. I was an athlete, so I was getting physicals every year. No one really noticed it until one time a doctor did notice it.

This was probably circa 2014, and they were like, “Oh, that’s odd, but you don’t really fit the demographics, so if it just grows any bigger go and see a doctor.” So, of course, by then, I am pretty sure that it already grew to its fullest extent.”

According to Sylvia, podiatrist spotted the streak and recommend that she visit a dermatologist. Unfortunately, the dermatologist wasn’t concerned, given her age and ethnicity.

Sylvia also said: “The diagnosis was that it was most likely a mole in the nail bed causing the pigmentation streak as the nail grew. The dermatologist felt there was less than a one percent chance it could be subungual melanoma, so they didn’t feel that a biopsy was warranted.”

According to the health officials, subungual melanoma is a rare and potentially serious type of skin cancer that occurs in the skin under the nails of the toes or fingers.

The dermatologist told the woman that she should keep an eye on it to see if any changes of size or color occurred. Sylvia said that for eight years nothing changed. Over time, it just became a part of her hand and the 25-year-old woman just stopped worrying about it.

In January 2021, the woman eventually underwent the biopsy at a dermatologist’s office. Unfortunately, the dermatologist told her that melanoma had been identified in her biopsy sample. The doctors reportedly told her that it was in its early stages and that she was lucky to have gotten it checked out when she did.

The 25-year-old woman also said: “I remember my heart dropping, and my doctor just went on about next steps. I just found out I had cancer in my thumb, and I was overwhelmed by how many appointments I had to make, as well as just having a taste of my own mortality.”

The 25-year-old woman then met with an oncologist who diagnosed her subungual melanoma at stage 0. This means that the disease had not spread to other parts of the body.

Sylvia also said: “I was informed that this cancer can stay in stage 0 for 10-13 years before hitting stage 1. I felt relief that I got it looked at when I did, but I knew there was more to come for getting rid of this cancer.”

In March 2022, the 25-year-old woman went to the Johns Hopkins Hospital in Maryland where doctors removed the top of her thumb, the Daily Mail reports.

Her test results showed that the cancer did not spread. She didn’t need to have her thumb amputated or require any further treatment. After being given the all-clear, she received a skin graft on March 25.

Sylvia told Newsweek: “From what I know, my thumb should no longer have cancer, but I will have to continue seeing my oncologist and dermatologist every three months for the next two years, and then every six months for the remaining three years since I am now deemed at high risk for having skin cancer. Overall, I am extremely lucky that this was my prognosis.

I think some people are afraid to confront the possibility of having cancer and facing their mortality. The biggest thing I have urged is to put your mind at ease and follow through with seeing someone. If this is caught early, it is very curable and having a wonky thumb for a month or two is better than not having one at all.

I suppose I could have insisted they biopsy the nail bed years ago to be certain, but I was young, naïve, and comforted by the confidence of the doctors who were basing my case on demographics and statistics.

You are taught to trust doctors and their judgments, but this should be a lesson to not play Vegas odds when the one percent result can be lethal. I should have stuck up for myself more.”