News WeekOcean Club Party
Home News “It was intentional. It was thought out. It was malicious… these are... 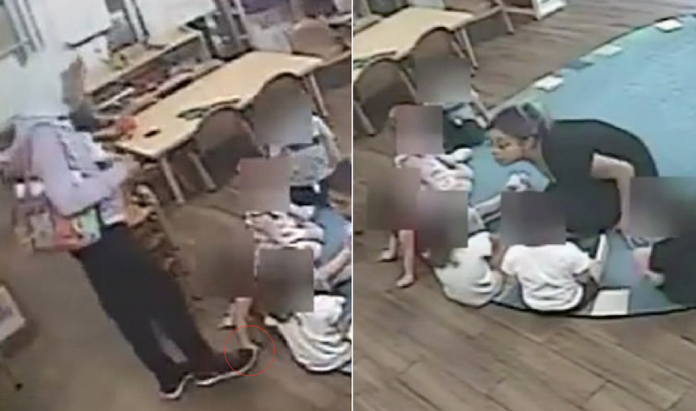 Pre-school educators were caught on live camera feed standing on a child’s hand, kneeing another child in the back, shouting at one child close to their face and shoving them in the forehead with a finger. Parents reportedly watched the teachers abuse 2 and 3-year-old students on a live video stream from the classroom. The video was reportedly seen by a concerned parent who decided to tune in to the school’s live-streaming of classrooms. The mother of one of the students said that she went to watch her son after she had a weird feeling that she needed to check on him. “It was intentional. It was thought out. It was malicious… these are defenseless little kids.” the mother reportedly said.

Both teachers, later identified as 40-year-old Zeina Alostwani and 19-year-old Soriana Briceno, were arrested for cruelty to children. The footage from inside the Pre-Primary B classroom of Parker Chase Preschool, reportedly shows both educators pushing and shouting at children as they sat in a circle on the floor as a group last week, the New York Post reports.

The alleged video was reportedly seen by a concerned parent who decided to tune in to the school’s live-streaming of classrooms on June 2. The mother of one of the students, later identified as Gloria Barghi, told investigators that she went to watch her son after she had a weird feeling that she needed to check on him.

The worried mother reportedly told WSB-TV: “I just told my husband, I said. ‘I’ve got a weird feeling I’ve got to check on our son. Call it mother’s intuition, I said, ‘I just want to see if he’s okay.’ I pulled up the app… I picked it up right when the lead teacher was assaulting the first victim. It was intentional. It was thought out. It was malicious… these are defenseless little kids.”

When the mother told the school officials about the incident, they didn’t believed that it really happened. The mother also said that the school staff had no policies in place, there were no procedures they go by if this type of incident occurs. The mother also told the outlet that she had to demand that the teachers were removed from the classroom.

The worried mother reportedly told WSB-TV: “And we would not leave until they were removed. The director even looked at me and questioned, “So you want me to remove them?”, and I said “You better believe it. Remove them now”.

Authorities later took both educators into custody and reportedly charged them with cruelty to children in the first degree.

Gloria Barghi also said: “I think back now to the things he’s told me, I think my son was trying to tell me all along, he’s expressed not liking the teachers, not wanting to go to school, crying to go to school. And of course, he has some behaviours now, after talking to professionals, that we do need to get him evaluated and make sure that the children are all okay. I think as a mom, your job is to protect your child. And there’s a guilt, that I put him in that environment every day.”

Authorities released a statement and said that they are now investigating several weeks of classroom footage to see if the accused teachers have assaulted other children.

“While we are extremely grateful that the children are well, we take this matter seriously and our investigation is ongoing. We expect our staff to adhere to the highest standards of care, and any failure to do so will not be tolerated.”