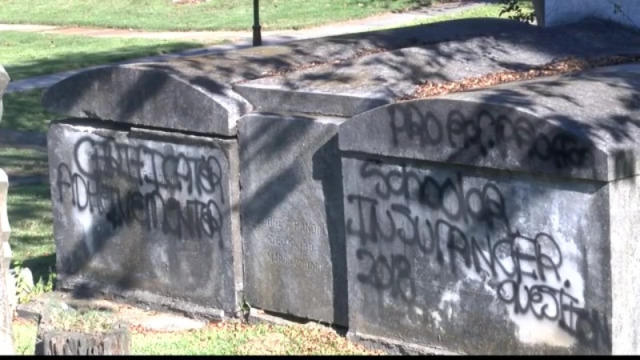 A local historian says funds will have to be raised to clean up and repair vandalism and damage done to gravesites at Shreveport’s historic Oakland Cemetery over the weekend, where three graves were tagged with black spray paint.

“Couldn’t even read what it says it’s just like script tagging. More like what you would see somebody do painting a boxcar on the train,” said Dr. Gary Joiner, who is also a member of the cemetery’s preservation board.

“A lot of times you would see people vandalize cemeteries for a variety of reasons. This was just stupid.”

Joiner visits the cemetery frequently for school assignments for his students at LSU Shreveport, but he learned of the vandalism Saturday through a post on Facebook.

“It appeared on Facebook and people started calling me and saying ‘Hey have you seen what’s going on out at Oakland?’”

He believes the gravesites were spray-painted at random sometime Friday and that the vandal or vandals just wanted an easy target to spray right by the entrance gate, which is normally locked at night but might not have been that night.

“Well, we haven’t had this kind of problem,” he said. “You see something like this and it’s just bad. I mean that’s barbarism.”

Oakland Cemetery is listed in the National Register of Historic Places and is the final resting place for six of the city’s mayors. The earliest tombstone there dates back to 1842.

“Whoever they are, I doubt if they are sorry but I feel like they should be,” Joiner said.

The city is responsible for the upkeep of the gravesites but Joiner says the Oakland Cemetery Preservation Society board will have to pay for the cleanup, which he said can be expensive.

Joiner said he also filed a report with Shreveport police Saturday and security cameras will be installed in the area.