News WeekOcean Club Party
Home News After they lost their 3-year-old son/brother in 2018, dad and his 2-year-old... 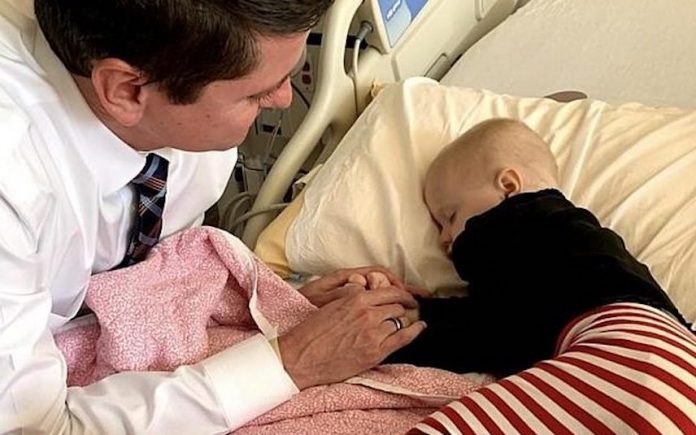 Unfortunate tragedy struck this family in 2018 when their 2-year-old son suddenly passed away. What initially seemed to be a stomach bug, left the child fatigued and nauseous. After throwing up a few times, his health suddenly took a turn for the worse. Later his family learned that the toddler had a massive brain tumor, a glioblastoma grade 4 which is “a very aggressive brain tumor.”

A year later, the Bowen family from Utah welcomed a daughter, Annabelle, who is now 2. Back in February 2021, she too was diagnosed with cancer leaving doctors puzzled about the reason why the Bowen children kept developing cancer. “The doctors said, ‘OK, this is your second child to get cancer. Let’s test your genetics and figure this out,'” recalled 41-year-old Nate Bowen, Annabelle’s father.

“When you have multiple children that are young that have cancers, there’s typically this genetic mutation often associated with it,” he added, according to reports.

The results of the test showed a rare genetic condition called Li-Fraumeni syndrome in Annabelle, which is a mutation in the TP53 gene, something that normally prevents the growth of tumor. But it inturn increases the likelihood of cancer in a child or a young adult.

This mutation can occur spontaneously but is often passed onto children through families. And the genetic tests revealed in July 2021 that Bowen too had it. Thus he was advised by doctors to undergo regular cancer screening. During one such screening in September, doctors discovered a brain tumor. “I had no symptoms,” shared Bowen. “They did a brain MRI and then they discovered I’ve got a large tumor in my brain.”

Despite the fact that his son died because of the gruesome disease which he and his daughter are now battling together, the family has chosen to remain optimistic. “My daughter getting cancer led to my genetic testing, which led to cancer screenings, and allowed us hopefully to catch it early enough,” he shared. “It’s one of those bittersweet things where there’s bad that comes of it. But there’s a good part.”

It was at the end of 2020 that the family noticed a growing bump on Anabelle’s leg. Following MRIs, the toddler was diagnosed with rhabdomyosarcoma, a soft tissue cancer of the muscle, according to reports.

In March last year, doctors were able to remove her entire tumor before starting her on chemotherapy, which is supposed to end on January 24. Anabelle tragically had a mutation, something that Bowen developed on his own.

“My parents tested negative on this mutation so I developed it on my own,” he said. His wife Allison and his two older kids Dalton, 8, and Tessa, 4, do not have it either. “A lot of times (a p53) mutation is associated with younger children getting cancer,” noted Bowen who never had cancer as a child. Most of his brain tumor was removed in October and but he isn’t undergoing radiation and chemotherapy as it could increase his chances of developing a different type of cancer.

“We’re trying to be very careful and only do that if they absolutely need to,” he shared. “Doctors) took 90% of it out so I’ve still got 10% left in there.” Although it’s a tough time for the father who is not only dealing with his own illness but is also worried about his youngest child’s condition, he feels it has brought him closer to her family.

“I have really grown to see my wife in a different light and really respect the woman she is and how strong she is,” he said. “Our love for one another has grown through the trials and we’re trying to be as positive as we can.”