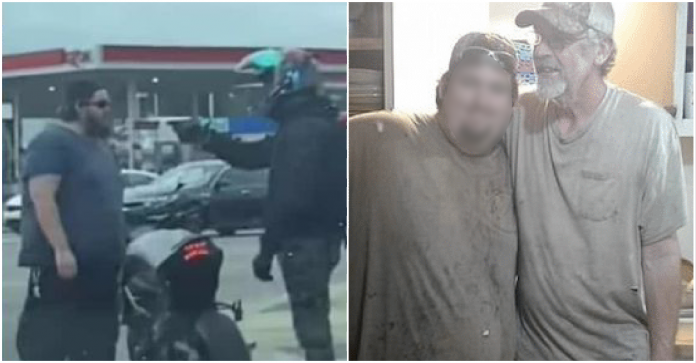 According to reports, officials are considering hate crime charges after a Black motorcyclist was shot dead during an alleged road rage incident with a White man and his son. Police said the 32-year-old victim was reportedly shot and killed by 51-year-old truck driver on Monday.

The 32-year-old man from North Carolina, Stephen Addison, was reportedly shot and killed by 51-year-old, Roger Dale Nobles, according to reports.

The suspect’s son, Roger Dale Nobles Jr, had moments earlier gotten out of his father’s truck to argue with the victim at a stoplight, before his father pulled a shotgun from inside the driver’s seat and fired it at the victim. The bullet struck the victim in the chest.

The 51-year-old truck driver was arrested as soon as he arrived home after the incident. He reportedly admitted to shooting the father of three and former veteran. He is now charged with first-degree murder, court records say.

The suspect’s son was taken into police custody and questioned. According to reports, County District Attorney Billy West said he was reviewing the evidence and considering additional charges, including possible hate crime counts, according to reports.

He reportedly sad: “If the evidence warrants that type of charge, it’s certainly something we would look at and pursue.”

The suspect’s son was not charged with a crime, but security experts say that it looked like the son anticipated the murder and played a role in it.

According to reports, the suspect’s neighbor said that Nobles had a history of aggressive behavior and had used racial slurs against her.

It remains unclear what let to the fatal encounter, and the admitted killer did not reveal a motive. This incident remains under investigation. This is a developing story and it will be updated as new information become available.