News WeekOcean Club Party
Home News Distressed mother can be seen with her three children sleeping on the... 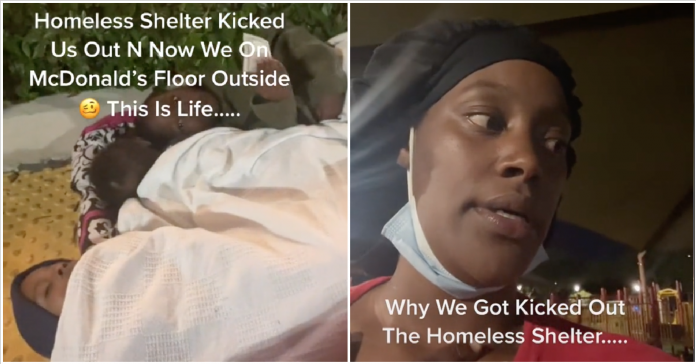 According to reports, the single mother of three is sharing her unfortunate situation after the family was reportedly kicked out of a homeless shelter due to the surge of COVID-19 cases. In the video, the mother can be seen with her three children sleeping on the ground of a McDonald’s restaurant. Despite the criticism, she held strong and shared her story with the world. The mom even assured the viewers that her children were taken care of.

She posted the video on TikTok on Dec. 27 and said: “Homeless Shelter Kicked Us Out N Now We On McDonald’s Floor Outside.”

The single mother of three also posted several follow-up videos responding to negative and positive comments. Despite the criticism, she held strong and shared her story with the world. The mom even assured the viewers that her children were taken care of.

In one of her videos, the mother reportedly explained the events that led to why her family was displaced, according to reports.

In one of the videos, the woman said: “People in the homeless shelter started getting COVID. So while they’re getting COVID, they’re putting people in rooms, separating people, and it just so happens I was one of the last people to get separated, and there was no room available for me. So we had to go.”

She explains that used to live in North Carolina, but mold in her home sickened her youngest child. She says he was hospitalized for three weeks. Because of the financial impact of those bills, they had to move back to Florida to live with her mother.

The mother of three also said that she had to put her children in daycare so she could go to work and it cost $500 per week.

Unfortunately, her mother kicked her out as the woman’s brother was returning from the Navy and needed a place to stay.

“I’m not the type of person to just take from people. I’m gonna get it. Because I feel like if you can get it, I can get it myself.”

In one of her videos, the mother also expressed her gratitude for the support she received from viewers.

“I never had nobody support me like y’all supporting me, and it’s crazy cause y’all are strangers. And my family won’t do the bare minimum. All my family tell me is, ‘give your babies up, just give them to somebody else and do it by yourself. Struggle by yourself.’”

“I’m not going to let my babies down. I’m not. And God is just testing me. He’s not going to give me kids and then put me through these tests if I wasn’t built for it. I’m built for this.”