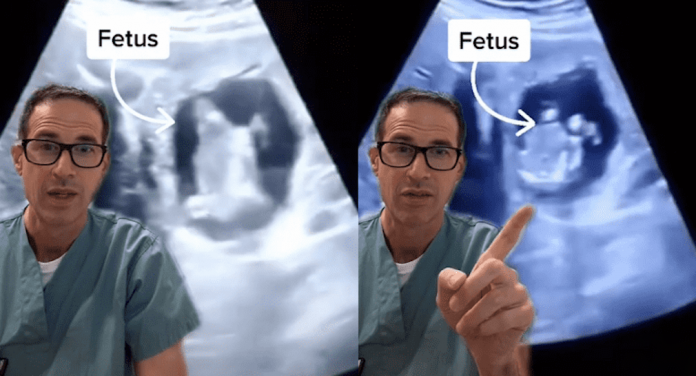 According to reports, the 33-year-old woman got the shock of her life when doctors discovered a fetus growing in her liver. It was reportedly an extremely rare case of ectopic pregnancy, an extraordinary occurrence where a fertilized egg implants itself somewhere other than the main cavity of the uterus. If and when this rarity happens, women can experience symptoms like pelvic and abdominal pain which worsens as the fetus grows where it shouldn’t.

Physicians found out about this particular anomaly after the unidentified 33-year-old woman from Canada visited a doctor to talk about her unusually lengthy menstrual bleeding, explained pediatrician Dr. Michael Narvee, according to reports.

“I thought I had seen it all,” said Dr. Narvey in the clip, adding how the woman had been experiencing menstrual bleeding for 14 days straight. Moreover, it had been “49 days since her last menstrual period.”

A sonogram later revealed the stunning reason behind her symptoms. “What they find in the liver is this: a baby,” explained Narvey pointing at a screenshot of the fetus. Now the unusual prenatal condition was first described in a 2012 case report but it recently when viral after Dr. Narvey shared its details on TikTok and explained why it was such a unique instance, according to reports.

In a follow-up clip, the medical expert noted how in a normal ectopic pregnancy, the fertilized eggs often “winds up getting stuck” in the fallopian tube.

According to reports, ectopic pregnancies are relatively common in the U.S., the chances being about one in fifty. However, they rarely leave the ova pass and fix themself on the abdominal wall. A report in Intractable and Rare Diseases Research revealed that only 14 cases such cases have been reported globally in the 35 years before November 1999.

That being said, this woman’s case was even rarer than the above-mentioned occurrences as her embryo “wound up traveling up to the liver where they implanted,” noted the astonished physician. “We see these sometimes in the abdomen but never in the liver. This is a first for me,” admitted Narvey, who works for the Children’s Hospital Research Institute, according to reports.

While it is an intriguing situation for those studying medicine, the condition can prove to be dangerous for both the mother and the child as the embryo that attaches itself outside the uterus is rarely able to develop properly.