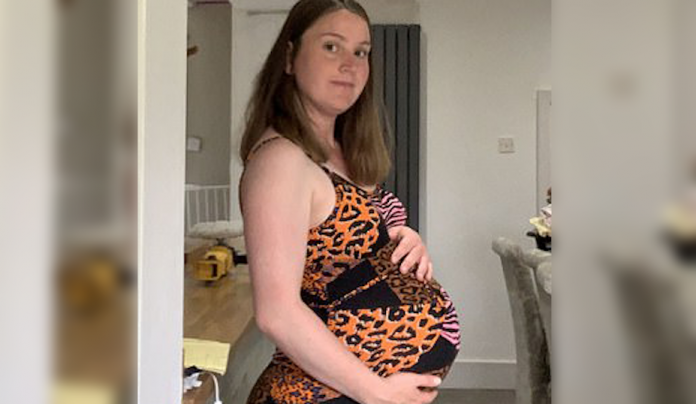 During her pregnancy, the 32-year-old mother suffered blisters all over her body, especially her baby bump. When she consulted a doctor, she was shocked to learn that she was allergic to her own baby. The mom reportedly made the discovery after becoming pregnant with her second child in late 2020. While the mother is still not sure why she has the disorder, the National Institutes of Health states that the trigger for autoantibody production is poorly understood.

It felt like a straightforward pregnancy as the first two trimesters went by smoothly without any complications. However, the 32-year-old mother, Fiona Hooker, soon began noticing red spots on her stomach just two months before her due date.

Concerned about her baby’s condition, she visited a doctor as the spots were starting to get unbearable.

“I went to the doctor after a few days because they were getting more and more itchy and unbearable,” Hooker said. The mother went on to describe the welts as “nettle stings” and was prescribed a range of steroid creams by medics. But that hardly worked in treating the symptoms that were turning severe.

“It was like I was allergic to my own baby,” recalled the devastated mother. When she was 8 months pregnant, the red bumps became so severe that Hooker had to be rushed to the emergency room.

“I couldn’t bear it [the pain] . . . they gave me four days of oral steroids which really helped calm it down,” she added. Finally, on June 13, 2021, the mother gave birth to her son named Barney and her health worsened.

“I exploded into blisters on my tummy, chest, arms and legs. Everywhere you would hold a baby. It was quite difficult,” shared the mother who was in incredible pain.

Her doctors were very confused initially after her condition because she already had a 3-year-old daughter, Phoebe, and suffered no complications during her first pregnancy.

After birthing her second child, Hooker was diagnosed with pemphigoid gestationis, which is a rare autoimmune disorder “caused by a woman’s immune system producing autoantibodies and mistakenly attacking her own skin.”

“When I was diagnosed I was shocked because it’s so rare — I was hoping they’d got it wrong and it was something else,” explained the mother. While Hooker is still not sure why she has the disorder, the National Institutes of Health states that the trigger for autoantibody production is poorly understood. “They think it might be to do with the baby. Something in the father’s DNA triggers the placenta to start attacking a protein which is also in the skin, so my body was attacking my skin,” she explained. “My son must have a gene from his dad that my daughter got from me instead because I didn’t have it with my first pregnancy.”

After six months of oral steroids, her blisters and scarring from the extreme reaction have finally subsided. Although she still has to use steroid creams occasionally whenever she suffers from minor flare-ups, something that will happen for the rest of her life.

Needless to say, she has no plans of having more children in the future. “It’s put me off being pregnant again, especially because the research says it will come on earlier and worse. I don’t think I could do that again even with steroids,” she noted.