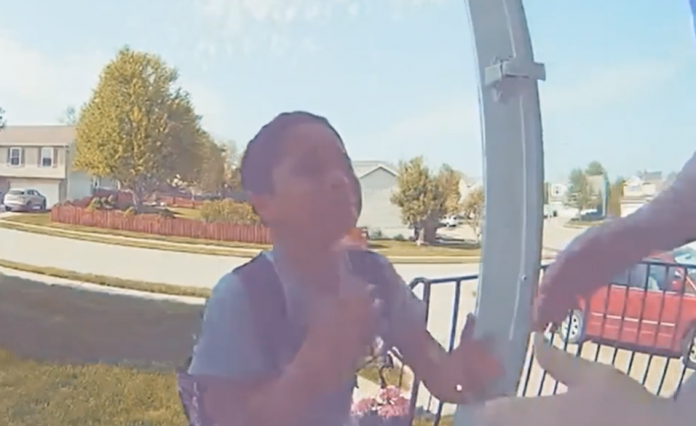 According to the boy’s parents, the school bus driver reportedly left their 7-year-old son at the wrong stop and reportedly ‘told him to walk home’, even after the child told the bus driver that this is not his stop and he doesn’t know where he is. Now, the boy’s parents want answers. The superintendent called the mother and apologized. The student transportation officials told the mother that they’re investigating this incident. The school district released a statement and said the bus driver is no longer transporting students in the district.

After the 7-year-old boy from Nebraska, Quincy Walker, was picked up at the Picotte Elementary School, the substitute bus driver didn’t take him to his bus stop. The boy’s mother, Makayla Walker, reportedly told WOWT that the bus driver dropped her son at the wrong address. Luckily, the young student remembered his former neighbor, Madison Bilsten, and was able to find his way to the street he used to live on.

The young boy, Quincy Walker, can be heard saying in the RING video:

“Jackson’s mom: My bus driver just left me out here and made me walk home, and I don’t want my mom to worry about me! Please! You need to pick me up if you’re here!”

During an interview with 6 News, Madison Bilsten reportedly said: “At first, I didn’t know what it was, I’m not used to my doorbell ringing. So I waited a minute, and all of a sudden, I just heard crying. I ran up the stairs from my basement, and I looked and saw Quinci out there, and I know him because he used to live next door.”

Bilsten also said that the 7-year-old boy and his family have moved, but he remembered his old street and her van. Luckily, the smart boy was able to find a safe place and his ex-neighbor called his parents.

Madison Bilsten also told 6 News: “At the time that he got to my house, I think it was 98 degrees outside. He was so sweaty; he was disorientated, he thought he was never going to get home. He told me that he told the bus driver ‘This is not my stop. I don’t know where I’m at.’ And the bus driver told him, ‘Well you need to get off and walk the rest of the way home.’”

The good neighbor then called Quinci’s parents and the boy’s dad arrived in just 5 minutes. The boy’s parents want answers. They also said that they are upset about the way the school bus driver handled the situation.

The boy’s mother, Makayla Walker, reportedly told WOWT: “Just like any other sane adult in this world would do, would make sure that a child gets home safely. And if a 7-year-old child tells you they don’t know where they are, what’s your first instinct? To figure that out for them. I was shaken. I was so mad I cried. I was mad, and I was sad at the same time. He could have got kidnapped — he could have got hit by a car.”

I couldn’t sleep last night ’cause I just thought about the what-if reasons. What if he went to the wrong house? What if I wasn’t home? What if he tried someone else in the neighborhood who was creepy or something? You just never know.”

According to KIRO7, Makayla Walker updated her family’s new address with the school system after they moved, but the school district didn’t keep up with the change. OPS superintendent reportedly called the mother and apologized. The student transportation officials told the mother that they’re investigating this incident.

“Our district is committed to safely transporting more than 18,000 students to and from school each day. We take that privilege and responsibility most seriously.

Investigating the incident, the drop-off occurred at the address on file for our family. We regret that this situation did not meet our standard of care for students. The substitute driver for our contracted service is no longer transporting students in our district.

Our Superintendent, district transportation staff, and school principal have all been in direct contact with our family to express our concern and support. We will continue to thoroughly review the matter.”