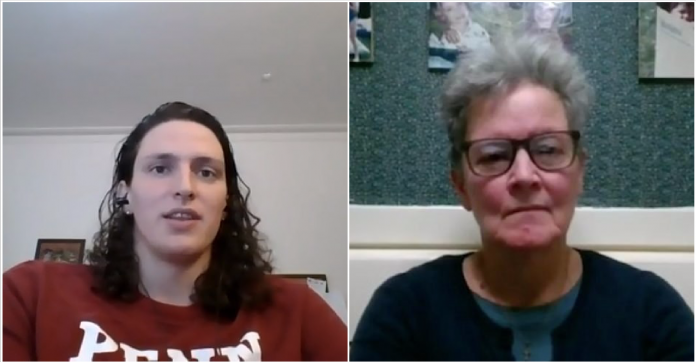 According to reports, USA swimming official has resigned in protest over transgender swimmer, saying she can’t back a sport that allows biological men to compete alongside women. “Gender identities don’t swim. Men are different from women, men swimmers are different from women, and they will always be faster than women.” the woman reportedly said.

The senior US official, Cynthia Millen, has reportedly quit over transgender athlete Lia Thomas, saying allowing her to compete is destroying swimming as a sport.

According to reports, Millen had officiated USA Swimming meets for three decades. She reportedly stepped down ahead of last week’s US Paralympics Swimming National Championships in North Carolina.

“I can’t do this. I can’t support this. I told my fellow officials that I can no longer participate in a sport that allows biological men to compete against women. Everything fair about swimming is being destroyed. This is not right because by doing this, we’re supporting this. There are no swim meets if there are no officials.” Cynthia Millen wrote in her resignation letter.

She is now hoping others in the sport will agree that the 22-year-old Lia Thomas has an unfair advantage over female competitors after revealing she was transgender in 2019 following three years on the men’s team at the University of Pennsylvania.

Officials said that the 22-year-old Lia Thomas has since smashed several Penn records this season, with one teammate finishing in second place in the 1650-meter freestyle some 38 second behind her.

Millen said she would deem Thomas ineligible to compete if officiating a meet and called on her now-former colleagues to do the same.

Lia Thomas is reportedly eligible under NCAA rules to swim in women’s collegiate events after taking one year of testosterone suppressants.

Cynthia Millen also said that men swim up to 12% faster than their female counterparts and have a greater lung capacity. And nothing that Lia did by taking a year off to take testosterone suppression drugs, that does not change Lia’s body, Millen said.