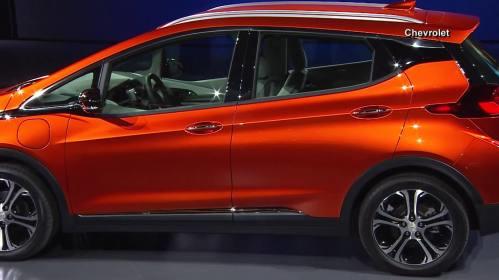 General Motors is recalling all 2017-19 model year all-electric Chevrolet Bolts because they may pose a fire risk.

The automaker is warning owners of those vehicles that until dealers can make a software fix, they should reset their battery to a maximum of 90% charge to lessen the risk of the car catching fire. If they cannot do that, GM advises to not park the car in a garage or carport.

GM said it found five vehicles in which the batteries caught fire without any impact, injuring two people with smoke inhalation.

The automaker filed the voluntary recall with the National Highway Traffic Safety Administration on Friday. It involves 68,667 vehicles globally; of those, 50,925 are in the United States, said Jesse Ortega, GM’s executive chief engineer for the Chevrolet Bolt EV.

“We became aware of these incidents this summer and we started to work with NHTSA on this,” Ortega told reporters of GM’s ongoing investigation of the problem. “A lot of it is being able to get access to the vehicles and getting access to the data.”

Another commonality among the five vehicles was they were at full charge or right below that, and “so that jumped out at us,” Ortega said.

GM said it has developed software that will limit vehicle charging to 90% of full capacity to mitigate this risk.

“We believe this action will reduce the risk of a vehicle fire, while we continue working around the clock to identify the root cause, and we intend to deploy a final solution to restore as much battery capacity as possible, after the first of the year,” Ortega said.

Until customers receive the dealer software update, GM wants them to change the charge settings on their vehicle to enable either “Hilltop Reserve” for 2017-18 model year vehicles or “Target Charge Level” for 2019 model year vehicles using their vehicle’s infotainment center. GM said changing these settings will temporarily limit the vehicle’s state of charge to 90%.

Ortega said if Bolt owners cannot make these changes, or do not feel comfortable making these changes, “we are asking them to not park their car in their garage or carport until after they have visited their dealer.”

Last month, NHTSA’s Office of Defects Investigation launched an investigation into the Bolt EV over three instances of fires that originated without impacts from accidents. GM’s five vehicles includes those three, Ortega said.