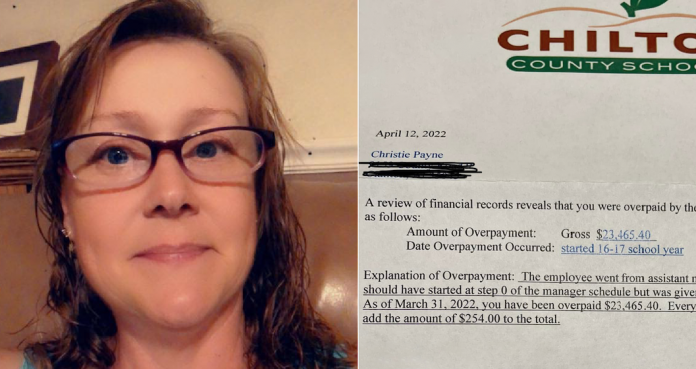 The high school child nutrition manager says that she recently received a letter from the school district, informing her that she had to pay the district back more than $23,000 due to a payroll error that had gone unnoticed for six years, after she received a promotion during the 2016-17 school year. Now, the school employee has three options for repaying the money. “Just received this in the mail. Had no idea this was happening. Now I have 7 days to fix a 6 year mistake made by payroll dept. Anyone have the answer?” The lunchroom manager posted on her social media account.

The lunchroom manager from Alabama, Christie Payne, has been told she must repay $23,465.40 after a payroll mistake caused her to be overpaid for about six years.

According to Newsweek, Payne said that she recently received a letter from the school district outlining the alleged overpayment.

The letter was signed by Superintendent Jason Griffin and it said: “A review of financial records reveals that you were overpaid by the CCBE. The employee went from assistant manager to manager.

The employee should have started at step 0 of the manager schedule but was given years of experience as an assistant.”

According to the letter, the child nutrition manager has three options for repaying the money. She can pay $325.91 monthly for 72 months, $3,910.90 annually for the next six years, or pay in one lump sum.

If the lunchroom manager objects to the overpayment or wants to propose another repayment schedule, she must do so in seven days upon receipt of the letter, which was dated April 12.

Payne reportedly told KFOR that she was shocked when she received the letter.

“I need help!!! Just received this in the mail. Had no idea this was happening. Now I have 7 days to fix a 6 year mistake made by payroll dept. Anyone have the answer?” she posted on her social media account.

“I met with the employee this morning, and we filled out the proper paperwork and are gathering all the documents that will be sent to the AEA legal department and they will review it and assess it.”

Superintendent Jason Griffin reportedly declined to comment on the situation.

“Due to employee privacy issues, CCSD will not be commenting on your inquiry,” Griffin reportedly said.