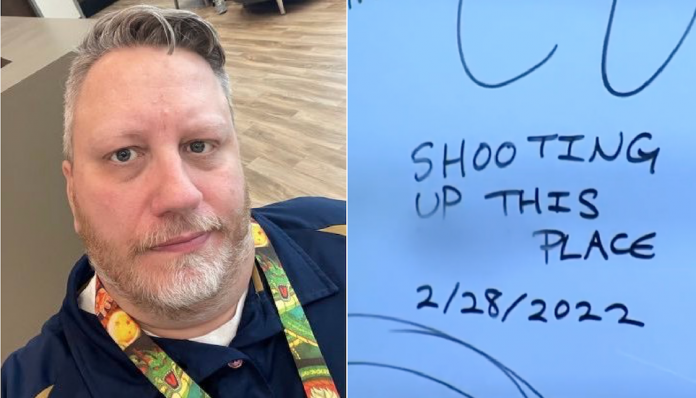 High school teacher lost his job after he reportedly leaked information about racial slurs, a hit list, and threats written on a bathroom stall inside the school earlier this year. The graffiti listed first names with last name initials, called the listed students racial slurs and derogatory names and degraded Black History Month and Black Lives Matter. According to the high school teacher, the school resource officers at the school did not begin interviewing students about the incident until several days after the incident. The school board said that there was no cover-up and the educator merely wanted to embarrass the school district.

The high school teacher, R. Cavet, lost his job on Friday, June 17, 2022. The board members voted 4 to 1 to fire the educator, who is reportedly accused of leaking photos of a school threat. According to KFOR, the graffiti was found in the girls’ bathroom at Norrman High School in Okl. back in February of 2022.

The history teacher reportedly alerted the school district first but believed they weren’t doing enough. Several parents said that they believe the educator did the right thing. Some of his students said that he was just trying to protect them.

According to the teacher, he reportedly got the pictures from a student and immediately recognized the importance of the photos. The educator also claimed at the time he saw the photos his fear and urgency were high.

One hour later, the educator reportedly feared that a cover up was going on because the officials weren’t taking action. The teacher then showed the pictures to another teacher and sent them to a parent saying he thought the district would bury it. School officials believe that the teacher sent the photos out about 1 hour after he saw them. According to LET, when the educator shared the photos with a parent, he reportedly wrote: “I don’t trust NPS to not bury this. So, if these made it to the media, that’d be great.”

The school’s principal reportedly said that they were looking into it and the educator never expressed any concerns to her. The school officials also said that the teacher didn’t share the photos with anyone else and only shared them with one of his bosses the next day.

According to News 9, during the hearing, three parents testified to the school board. One of the parents, Tonya Hawkins, said that her daughter was on the list. When the attorney asked her: “Do you have any problem with what Mr. Cavet did?”, Hawkins reportedly replied: “Not one bit.” Hawkins also added that the school district could have done more to keep parents informed, because, according to her, there was zero information given.

Another parent, later identified as Melissa Barnett, said that her daughter’s name was also on that list. “It is a threat to my kid and to everybody else. I really just wanted someone at Norrman High to give me peace of mind that it wasn’t just going to be done and over with.” Barnett reportedly said.

According to the high school teacher, the school resource officers at NHS did not begin interviewing students about the incident until several days after the incident. The police department claimed that there was no racial component to the threats, despite the slurs and references to black history month. The entire situation, from the district’s standpoint, appears to be one contradiction after another, LET reports.

During the hearing, the teacher said it was about notification and district miscommunication in the email sent to parents claiming there was no credible threat to the school. But, the school board said that there was no cover-up and the educator merely wanted to embarrass the district. They reportedly found that the teacher committed repeated negligence in his duties as a teacher, that he violated policies, laws and his contract, and that his actions were contrary to justice.