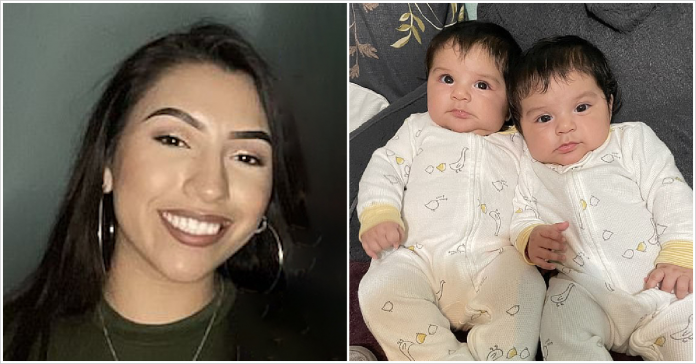 The mother of two reportedly claims that she got pregnant while she was already pregnant. The moms says she conceived her two daughters 5 days apart. During her first scan, the doctors told the 25-year-old mother that she was expecting two babies. The babies were reportedly conceived during different times in the same week, the doctors said. The rare phenomenon is said to occur in 0.3% of pregnancies, while many health professionals suggest it doesn’t exist in humans at all.

This rare phenomenon is known as superfetation when a new pregnancy happens during an initial pregnancy. The second one follows days or even weeks after the first pregnancy.

The couple from California, Odalis and Antonio Martinez, were expecting a baby in November 2020. Odalis suffered a miscarriage a few months earlier, the Daily Mail reports.

During her first scan, the doctors told the 25-year-old mother that she was expecting two babies. The babies were reportedly conceived during different times in the same week, the doctors said. The rare phenomenon is said to occur in 0.3% of pregnancies, while many health professionals suggest it doesn’t exist in humans at all.

The 25-year-old mom from California reportedly said: “I was extremely happy that the pregnancy test was positive and we were on our pregnancy journey again. I felt really lucky. I know a lot of people that have been trying to conceive and just haven’t been able to so that was also a fear of mine but thankfully that wasn’t our case and I fell pregnant really quickly.”

The 25-year-old mother also said that she was worried, because she suffered a miscarriage just four months earlier.

Odalis Martinez also said: “It was pretty terrifying throughout my whole pregnancy not knowing if that was going to be the outcome again. Hoping for the best but knowing there’s always a possibility that things might not go as planned.

I was just so scared that they were going to tell me ‘oh, there’s no heartbeat’ so I was so anxious the whole time I was texting Antonio like ‘I’m so scared’. The doctor comes in and I’m trying to mentally prepare myself for anything and when she found the first baby and the heartbeat I was crying with so much happiness.

And then she started going back and forth and I was wondering why – my mind just went to the worst-case scenario because of the traumatic experience that we had. That’s when she told me that she had found another baby that also had a heartbeat. I was just crying with happiness. I felt like the first baby that we had lost was in the room with me and saying it was going to be ok.”

On 10 August, 2021, both babies arrived safely. The parents named them Lilio and Imelda.

The 25-year-old mom from California told the Mirror: “I feel like it’s some sort of miracle that I experienced this double pregnancy. Because of our first experience, it made everything during this pregnancy feel so much more special and magical. Just how easy I was able to conceive, and knowing that I had two babies, I just felt like there was so much light after such a dark place. It was the best surprise ever.”

The parents said that their children look so similar and they sometimes mix them up. The parents tell people they are twins rather than explaining how they were conceived.

“They definitely look a lot alike,” the lucky mother said.