News WeekOcean Club Party
Home News Mother, whose baby had just gotten back from the hospital after being admitted... 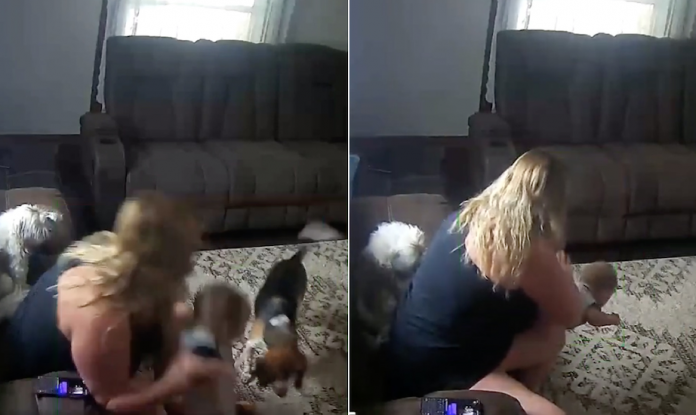 The 30-year-old mother, who is a registered nurse, and her infant son just got back home from a couple of days in the hospital after the baby was admitted to the hospital with COVID-related pneumonia and dehydration. The little boy was reportedly eating lunch when his mother noticed he was struggling to breathe. The mom claims her quick reaction on instinct managed to save her son from choking. Now, she is urging other parents to be prepared and get first aid training.

The young mother, Christa Stachura, told The Mirror that her her quick reaction on instinct managed to save her infant son Jack from choking. Stachura, who is also an emergency room and trauma registered nurse, says her baby was eating lunch when she noticed he was struggling to breathe. Unfortunately, Stachura was forced to slap her baby on the back to prevent him from choking.

The 30-year-old nurse also said that she and Jack just got back from a couple of days in the hospital. The little baby was reportedly admitted to the hospital with COVID-related pneumonia and dehydration. The young mother was happy when her son started eating solid foods again, until the incident occurred.

Christa Stachura reportedly told The Mirror: “I was so excited that he finally wanted to eat solids after not wanting to eat or drink for days. He was eating some eggs and thinly-sliced apple when I saw him gagging. We do some baby-led weaning so gagging and coughing can be normal. Of course as any mother would be, I was nervous and watching him but I also stayed calm so he wouldn’t panic.”

The mother also said that her baby son tarted waving his arms by his throat, with silent tears streaming down his face. The trained nurse then put her son face-down on her lap and reportedly gave him 5-6 back slaps to dislodge the piece of apple. The mother then saw that the piece of food came out of her son’s mouth and heard his gasp for air. Stachura knew her son was safe.

The 30-year-old woman shared the video with SWNS and warned fellow parents about the importance of CPR and first aid techniques.

Christa Stachura reportedly said: “Initially I felt a little guilty, I didn’t know that apples were a common choking hazard. But I think it’s important not to shame ourselves or others. Parents are always going to make some mistakes but we can constantly learn from them too.

Most of the reactions have been so positive and supportive, but there have been a couple of people who think I overreacted. Babies and toddlers are constantly exploring and putting things in their mouths and it’s a parent’s job to protect them When in doubt, always trust your instinct and take action – a few back slaps won’t hurt them!”

Now, the brave mother from MI hopes that she will encourage fellow parents to research food safety and get first aid training. Stachura also explains in the video that parents should always be with their baby when they’re eating, The Sun reports.

The 30-year-old registered nurse also added: “It’s very important to know the differences between gagging and choking and how food should be prepared – talk with your pediatrician and get good recommendations.

I work in the emergency department and have proper training, which was essential in saving Jack from choking. There are plenty of resources available for people to get first aid and CPR trained. It’s also vital to renew your training yearly – being as prepared as possible could literally save someone’s life one day.”