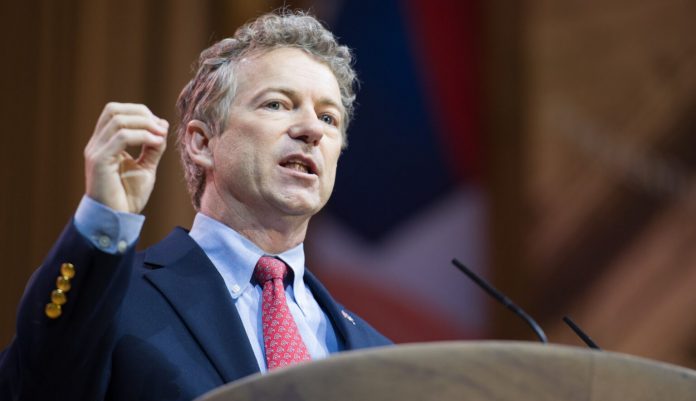 Senator Rand Paul is ‘done’ with what he has called ‘mask theater.’ The Kentucky senator announced on Thursday that it is his intent to introduce an ‘immediate repeal’ of the mask mandate on airplanes when the Senate returns to session.

“When the Senate returns to session, I will be introducing an immediate repeal of the mask mandate on planes,” Paul said on Twitter. “Enough! Time to stop this farce and let people travel in peace!”

Senator Paul, who has practiced medicine as an ophthalmologist, has consistently pushed back on mask-wearing, particularly for those who have been vaccinated.

The latest CDC guidance on mask wearing says: “If you are not fully vaccinated and aged 2 or older, you should wear a mask in indoor public places.” It adds: “In general, you do not need to wear a mask in outdoor settings.”

“Masks are required on planes, buses, trains, and other forms of public transportation traveling into, within, or out of the United States and in U.S. transportation hubs such as airports and stations,” the CDC website continues. “Travelers are not required to wear a mask in outdoor areas of a conveyance (like on a ferry or the top deck of a bus). CDC recommends that travelers who are not fully vaccinated continue to wear a mask and maintain physical distance when traveling.”

The Transportation Security Agency has closely adhered to the guidance of the Centers for Disease Control, which has pushed masks for all citizens regardless of substantiated mask effectiveness or risks. The TSA and numerous airlines have caused controversy with their aggressive enforcement of masks. The issue has sown a significant amount of the cases of ‘unruly passengers’ on flights.

“A majority of the Federal Aviation Administration’s unruly-passenger reports on airplanes stem from passengers who refuse to comply with mask mandates put in place to guard against the spread of Covid-19,” CNBC recently reported.

“Roughly 75% of the unruly-passenger reports since Jan. 1 have started with people who didn’t want to wear their masks and escalated from there into profanity, shouting matches, even physical violence,” the agency said on Tuesday.

“The FAA implemented a ‘zero tolerance’ policy at the beginning of this year with hefty fines that was aimed at curbing unruly passengers after an uptick in incidents, but that hasn’t stopped travelers from swearing at airline workers, disrupting flights and even knocking two teeth out of one flight attendant’s mouth,” the report added.

In May, the NY Times reported on massive fines against unruly passengers who turned violent after confrontations over mask wearing.

“Four people are facing nearly $70,000 in civil fines for clashing with airline crews over mask requirements and other safety instructions on recent flights, part of what the Federal Aviation Administration called a ‘disturbing increase’ in the number of unruly passengers who have returned to the skies with the easing of pandemic restrictions,” the Times reported.

“The latest round of proposed fines, which passengers have 30 days to contest, came just days after the F.A.A. said that it had received more than 1,300 unruly-passenger reports from airlines since February,” the report continued. “In the previous decade, the agency said, it took enforcement actions against 1,300 passengers total.”

The legal bases for numerous COVID lockdowns and restrictions, such as the mask mandates, have come from “emergency powers.” The U.S. is down to under 360 cases per day (7-day rolling average) and is nearing 150 deaths per day. The “Delta” variant that the media has been referring to has a case survival rate of 99.9% according to NHS official figures.

Furthermore, the Supreme Court has held that Americans have the right to travel freely as an ‘implied right’ in the Constitution. The TSA keeping Americans from flying based on masks or other COVID restrictions may violate their due process rights, in the absence of an actual ongoing public health “emergency.”

“The right to travel is a part of the liberty of which the citizen cannot be deprived without due process of law under the Fifth Amendment,” the Supreme Court has ruled.

“The right to travel, to go from place to place as the means of transportation permit, is a natural right subject to the rights of others and to reasonable regulation under law. A restraint imposed by the Government of the United States upon this liberty, therefore, must conform with the provision of the Fifth Amendment that ‘No person shall be deprived of liberty without due process of law’,” an appeals court held.

New studies released by the CDC shows masks were relatively ineffective at preventing case rate growth and mortality rates. Masks’ effectiveness after weeks of compliance varied from 0.5% to 1.9% maximum possible COVID-19 spread prevention after 100 days of implementation. This is virtually within the margin of error due to reportage issues. Futhermore, a CDC report from October said that over 70% of COVID-19 said they “always” wear masks. It did not significantly “slow the spread.”

What did spread during the COVID pandemic is restrictions on Americans’ personal choice and freedoms. Just because ‘the right to breathe freely’ isn’t listed in the Constitution, doesn’t mean that it isn’t an implied right.