News WeekOcean Club Party
Home News Restaurant worker is being hailed a hero after jumping through window to... 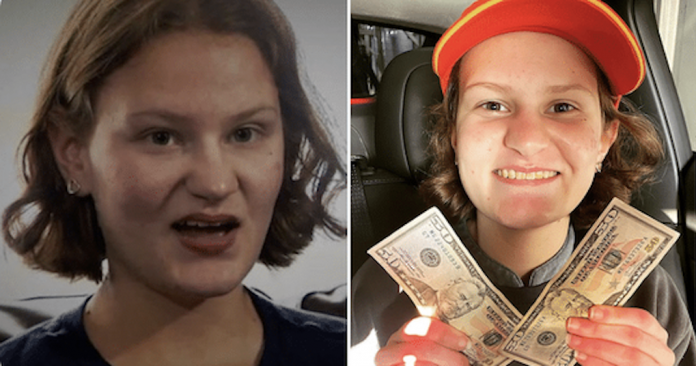 According to reports, the 15-year-old girl from Minnesota is being hailed a hero after jumping through a drive-thru window to save a customer choking on a chicken nugget.  The McDonald’s worker, who has been working at the fast food restaurant for seven months, was just about to end her shift Saturday when the medical emergency occurred. After instructing the restaurant manager and the customer’s daughter to call 911, the girl tried the life-saving maneuver.

“The day had been mostly normal, making coffee, making drinks. Going into the lunch rush, it was all normal.” Sydney Raley said.

According to reports, the things took a dramatic turn when the teen, whose family said has autism, handed a customer part of an order and then stuck her head out the window to tell the woman that the rest of her food was on the way.

The 15-year-old girl, Sydney Raley, said: “She was coughing like crazy, and I noticed she was gagging. Her daughter was in the passenger seat, and she looked so freaked out. I immediately knew, ‘Oh, no! She’s choking.”

Sydney, who reportedly learned the Heimlich maneuver when she took a baby-sitting first aid class at age 11, then jumped into action as all that training kicked in.

Sydney reportedly told her manager and the customer’s daughter to call 911. She then tried the life-saving maneuver and called on a bystander to help when it didn’t dislodge the nugget at first. They worked together and were able to successfully dislodge the food from her throat, according to reports.

The responding officers rewarded the girl with $100 from a fund earmarked for Good Samaritans. The officers reportedly told her: “Congratulations, you’re a lifesaver — you’re a hero.”

Sydney’s parents, Tom and Stephanie, said that Sydney, like the individual whose life she saved, also has autism.

‘We always worried it was going to be a challenge for her, and it’s done a complete 180. It’s actually been a blessing and a gift at this point. All the things we worried about never happened.” Sydney’s dad said.

“We are incredibly proud of Sydney and her quick, heroic actions over the weekend to help one of our valued customers. Sydney truly personifies what it is to be a hero and we are incredibly lucky to have her as a highly valued crew member at our restaurant location.

We are excited to see all of the well-deserved recognition she has received from the community and will continue to celebrate her courageous efforts of literally jumping out of the drive-thru window to provide aid to a customer in need.”