News WeekOcean Club Party
Home News Student is worried about his future after school officials accused him of... 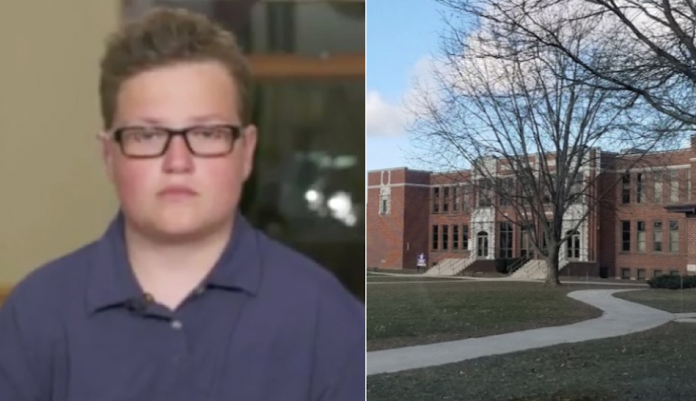 The young student is afraid that he will be ignored by other students and is worried about his future after the school officials accused him of harassment because the boy reportedly used the wrong pronoun when talking to a non-binary classmate. When the school walked the student’s mother through the complaint, the mom claims she was told the report had come from a music teacher. The music teacher reported multiple instances where they claimed her son had been harassing the student that uses they/them pronouns. In one instance, the music teacher reported her son had defended another student for refusing to use the preferred pronouns.

During an interview with Fox News, the young student from Wisconsin, Braden Rabidoux, reportedly said that the school district has filed a Title IX complaint against him and two other students for referring to the student as ‘she’ rather than ‘they’ or ‘them.’

The school district has charged the three students at the middle school with s–ual harassment after an incident in April in which the students refused to use “they” to refer to a classmate who had switched pronouns a month before the alleged incident, the New York Post reports.

The 3 students were reportedly criticized by the non-binary classmate who screamed abuse at the three students for using female pronouns instead of gender-neutral ones.

Per reports, using the wrong pronoun for a transgender or non-binary person is known as misgendering.

“I was anxious and scared and upset because I didn’t know what was going to happen. But mostly anxious for my present self and my future self because a charge like that on my record could shatter my chances at getting into a college when I grow up.”

“I received a phone call from the principal over at the elementary school, forewarning me; letting me know that I was going to be receiving an email with s–ual harassment allegations against my son. I immediately went into shock. I’m thinking, s–ual harassment? That’s rape, that’s inappropriate touching, that’s incest. What has my son done?

The investigating principal said he’s being allegedly charged with s–ual harassment for not using proper pronouns. I thought it wasn’t real! I thought this has got to be a gag, a joke — one has nothing to do with the other.”

According to NBC26, when the school officials walked her through the Title IX complaint, the mother claims she was told the report had come from a music teacher.

Rosemary also said that her son Braden stood up and told the teacher that he doesn’t have to use pronouns, it’s his right, it’s his constitutional right, to not use pronouns. “That’s what Braden was in trouble for, for standing up for his friend.” the mother said.

The students’ parents contacted the Wisconsin Institute for Law and Liberty, who reportedly wrote a letter to the school demanding that the investigation be dropped and argued that what the students had been accused of did not constitute a Title IX violation.

Luke Berg, from the Wisconsin Institute for Law and Liberty, said the allegations are a gross misapplication of Title IX s–ual harassment charges.

“This is middle school. These guys are kids, they’re learning how to interact with each other, and they’ve been taught all their life to see a girl and use pronouns “she” and “her.” They don’t understand using plural pronouns for one student. Schools should be focused on education, on math and science and social studies, and not … pronouns.”

The Wisconsin Institute of Law and Liberty sent the following letter to the school:

“The mere use of biologically correct pronouns not only does not constitute s–ual harassment under Title IX or the District’s own policy, it is also speech protected by the First Amendment,’ a May 12 letter to the school superintendent, counselor, and principal reads.

The District has also violated Title IX procedures and its own policy in its handling of the complaint. The District should promptly end the investigation, dismiss the complaints, and remove them from each of the boys’ records.

‘Mispronouning’ is also not s–ual harassment under Title IX because gender identity is not included within the definition of s– within Title IX. In fact, the Department of Education is currently attempting to amend Title IX to add it.

To be clear, this statement does not accurately or fully portray the incidents described—as you know, the student in question has teased the boys as much if not more, including calling them numerous names and yelling at them for not using ‘they/them’ pronouns even when they were not talking to or about her—but even if everything in the music teacher’s statement were accurately characterized, it does not amount to the sort of ‘severe, pervasive, and objectively offensive’ conduct that crosses the line into s–ual harassment.”