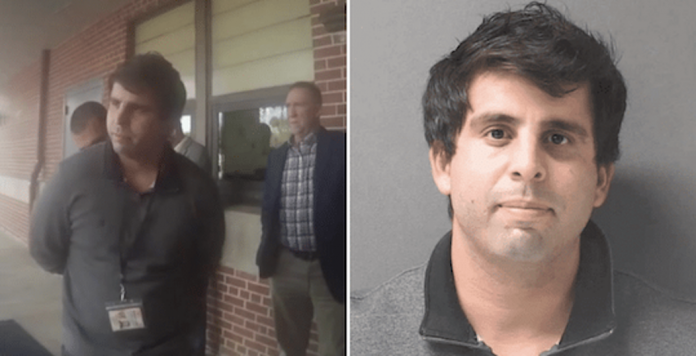 The 29-year-old mat teacher reportedly kissed a female teen student on the lips in class. The middle school teacher had reportedly been pursuing a relationship with the 15-year-old girl. The 29-year-old man reportedly asked two other students to leave and then allegedly stood up, wrapped his arms around the female student while she was facing him, pulled her mask down and kissed her on the lips, despite her attempts to pull away.

The 29-year-old teacher from Florida, Carlos Aguirre Rendon, had reportedly been pursuing a relationship with the 15-year-old girl before he was taken into custody on Wednesday.

The middle school teacher reportedly asked two other students to leave and then ‘stood up, wrapped his arms around the girl while she was facing him, pulled her mask down and kissed her on the lips, despite her attempts to pull away, on January 7.

Investigators began investigating the math teacher on January 11 after someone tipped them off to the incident, according to reports.

According to the police officials, the ‘girl’s parents were reportedly aware of a close relations between their daughter and the teacher since the beginning of the school year but didn’t think anything of it because she had been attached to teachers in the past.’

The student’s parents reportedly became concerned when her mother said she saw Aguirre, a father of two children, with his arm around her daughter at a local park.

The teacher would reportedly bring his two young children to Firefighters Memorial Park to meet the female student.

According to reports, when the teacher and the student met at the park, the teacher would reportedly leave his two kids in their car seats while he talked with the victim.

The teacher would then look through her phone and ask if she was talking to boys.

Police officials said the math teacher often sought to be alone with the victim and appeared to be pursuing a relationship with her outside of normal teacher-student contact.

The middle school teacher also asked other students to leave the classroom so he could be alone with her. He would follow her around campus in between classes and even offered himself as a private English tutor when he noticed she was struggling with the subject.

The female student was transferred out of his class and the teacher was advised not to return to the school pending an ongoing investigation.

According to reports, when the teacher discovered that the girl was being removed from his class, he reportedly said: “If you get taken out of my class, I am leaving this school. I will transfer to University High School to see you.”

Investigators discovered that the teacher had reportedly approached potential witnesses at a local park asking about the victim and telling at least one witness not to talk to the police.

He is now charged with lascivious conduct and witness tampering. This incident remains under investigation. This is a developing story and it will be updated as new information become available.