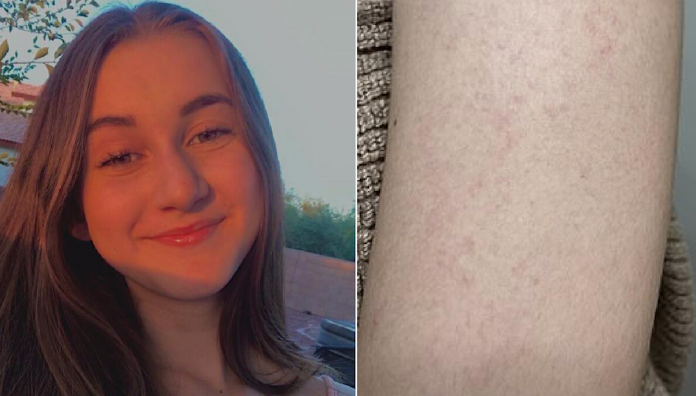 The 15-year-old girl claims she was diagnosed with extremely rare condition last month after its symptoms first struck few years ago. The teenager says she is allergic to water and claims she can’t cry or shower regularly because she breaks out in rashes. The young girl said she has not had a glass of water for more than a year and usually drinks energy drinks or pomegranate juice, which have a lower water content. Health officials said that the exact underlying cause of aquagenic urticaria is poorly understood. It is thought the condition may be due to a substance in water that triggers an immune response. Doctors also said that most cases occur randomly with no family history of the disorder.

The 15-year-old from Arizona, Abigail Beck, told New York Post that she was diagnosed with aquagenic urticaria last month. The symptoms struck three years ago, she said.

According to the health officials, aquagenic urticaria is estimated to affect one in 200million people and it reportedly causes hives to form when their skin comes into contact with water.

Even when she showers or when it rains, it feels like acid, the young girl said.

According to Beck, she has not had a glass of water for more than a year because it causes her to vomit. She usually drinks energy drinks or pomegranate juice, which have a lower water content.

Beck told the New York Post that the doctors were reportedly forced to give her rehydration pills and are considering giving her regular IVs to get more fluids into her in the future if her condition does not improve.

The teenager said that she initially experienced the symptoms in 2019 at age 13.

Health officials said that the exact underlying cause of aquagenic urticaria is poorly understood. It is thought the condition may be due to a substance in water that triggers an immune response. Doctors also said that most cases occur randomly with no family history of the disorder.

According to the Daily Mail, the young girl held off going to see a doctor because she was afraid they would think she was crazy.

Abigail Beck reportedly said: “It took a long time to get diagnosed. It slowly progressed and started getting worse over time. When it rained it hurt really badly, it felt like acid.

Beck first thought that something was wrong with the water in her home or she was having a reaction to skin lotion.

Unfortunately, after some time, her symptoms got worse. She says the extremely rare condition has disrupted her ability to shower, exercise and even cry.

Abigail Beck reportedly told Daily Mail: “My own tears cause a reaction where my face goes red and burns really badly. I cry like a normal person and it hurts. Tears are one of the worst parts of it because when you cry, your tears shouldn’t burn your skin.

It runs my life but I don’t want it to. I throw up if I drink water, my chest hurts really bad and my hearts starts beating really fast.”

The teenager also said that she only drinks a small amount of water at a time and takes antihistamines and steroids to tackle the reactions.

The 15-year-old girl told the New York Post: “I have to check labels but everything in this world has water in it. The last time I drank water was a year ago. I’m scared that if it gets out of control one day, no one will know what to do including myself. I don’t even know how to help myself.

I try to keep in good spirits and I know that if something did happen then the people around me will do the best they can. I have no idea what could happen which is scary for me. I never have the urge to drink water at all, I don’t want to drink it, the taste is bad for me.

There was talk of me getting an IV line put in so I could take in fluids but that’s more down the road. If things keep progressing, I’ll need a more permanent treatment. I don’t have an epi pen but I have an appointment with an allergist to come up with a game plan and I have a health plan at school so the nurses have a plan ready in case I have a reaction because I could pass out.”

The 15-year-old girl from Arizona said she is sharing her story to raise awareness of the condition and to help educate people in the hope that they’ll be more understanding about it.

Abigail Beck also said: “It gets really frustrating. People ask me to explain how it works and I can but I can’t explain why it happens because nobody knows or understands it. I had to educate my doctors about my condition because they’ve never had to experience it before.

When I tell people that I’m allergic to water, people think it’s absolutely ridiculous and a lot of people are shocked by it. People always point out that our bodies are made up of water. Some people ask questions which I’m fine with because I’d like to help educate someone so I’m open to answering questions.”