News WeekOcean Club Party
Home News “They have no regard for him, no humanity”, Family of a Black... 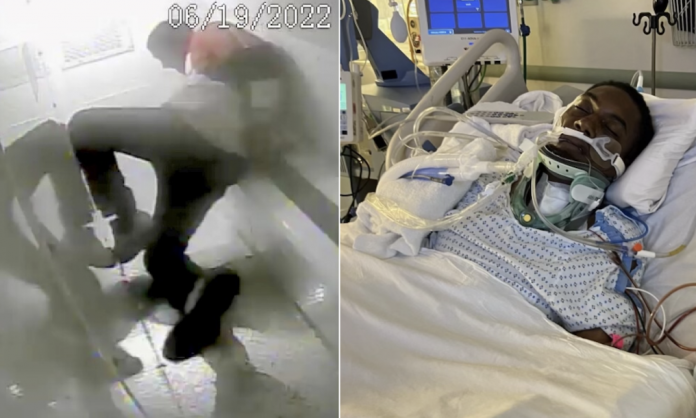 Family of a Black man demands justice after the 36-year-old man was left paralyzed while in custody after hitting his head against the wall of a police van. According to his family, the 36-year-old man was left paralyzed from mid-chest down, has a little movement in his left arm and tiny movement in his right arm. His sister also said that he now needs breathing tube and a feeding tube. The civil rights attorney who is representing the family on the case, reportedly said: “They mock him, pull him off the van feet first, they throw him in a wheelchair with no regard and his body is limp like a rag-doll. They have no regard for him, no humanity, he tells them I think my neck is broke and they discount it.”

On June 19, 2022, the 36-year-old man, Richard Cox, was arrested for a gun charge after officers responded to a weapons complaint at a block party, ABS reports. His sister, LaToya Boomer,  said that her brother is now paralyzed from mid-chest down, has a little movement in his left arm and a tiny movement in his right arm. Unfortunately, Richards now needs a breathing tube and a feeding tube.

“I want the officers involved fired and arrested, the onlookers that were watching but didn’t intervene, I want some kind of punishment for them too whether it be suspensions or retraining, something, all it would have taken is one person to say, something is not right,” LaToya Boomer reportedly said.

In the video, published on social media, the 36-year-old man was placed in the back of a police van. While Richard was being transfered to jail, the van driver slammed on the brakes. Cox, who was unbuckled and seated on a narrow bench at the time, slid off the bench and hit his head against the metal wall of the van.

In the video, the 36-year-old man can be heard pleading for help. One of the officers heard Cox and pulled over to check on him. The officer reportedly called an ambulance to meet them at the jail. When the van arrived at the jail, the officers reportedly dragged the man out of the van by his feet, his family said.

Ben Crump, the civil rights attorney who is representing the family on the case, reportedly said: “They mock him, pull him off the van feet first, they throw him in a wheelchair with no regard and his body is limp like a rag-doll. They have no regard for him, no humanity, he tells them I think my neck is broke and they discount it.”

According to Cox’s family, the 36-year-old man was at the jail for nearly 15 minutes before he was checked out by paramedics. According to Boomer, her brother reportedly had two neck surgeries stemming from his encounter with police. “He’s had two surgeries on his neck, so they did 5 and 6 vertebrae on the front, and they did surgery on two through seven on the back” the woman reportedly said.

Last week, Police Assistant Police Chief Karl Jacobson reportedly ‘acknowledged wrongdoing by the officers and said that the 36-year-old man was mistreated. Police Assistant Police Chief Karl Jacobson also said that Cox should have received medical attention immediately. The 5 officers involved have been placed on paid leave while the incident is being investigated by the Connecticut State Police and Internal Affairs, according to the NHR.

“They dismissed his pleas as lies. Instead of offering immediate medical aid, officers dragged him off the van & threw him into a wheelchair that may have exacerbated his life-threatening injuries. Randy was brutalized when there was NO reason for the police to do so. Now, Randy Cox continues to fight for his future. He’s paralyzed from the chest down and has to use a breathing tube – his quality of life is forever diminished. He needs accountability!” Ben Crump also said.

This video is HORRIFIC! Randy Cox was put in a police van without seatbelts and, after an abrupt stop, was thrown into the wall HEAD FIRST. We literally witness his neck break! As he was STILL lying on the van floor, he told the officers that he couldn’t move. What did they do? pic.twitter.com/L9izx7vmDt