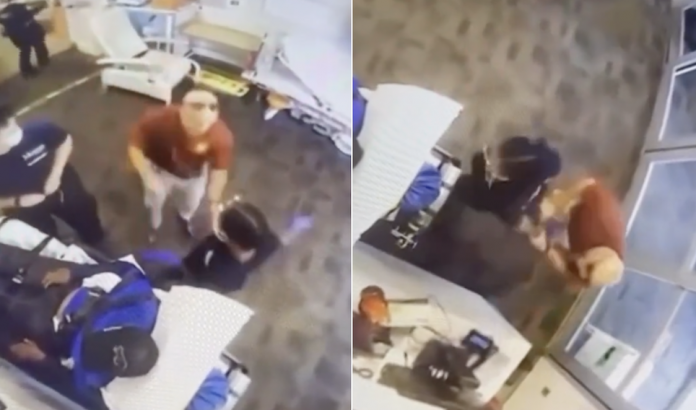 Emergency medical technician was handcuffed after she reportedly hit the ambulance door into investigator’s patrol car parked in the ambulance bay. The investigator’s car was parked in the ambulance bay in front of the emergency room when an EMT hit it while opening her door to unload a patient. The investigator insisted on getting her identification, she insisted on bringing the patient inside first. Black civil rights activist said that he already spoke with the EMT and they are supporting her. He said: “This is just evidence that Black people, Black women, are often victimized, even in the most extraordinary circumstances. This victim was just doing her job.”

According to News10NBC, RPD’s accountability board is investigating after a surveillance video shows an investigator handcuffing an emergency medical technician tending to a patient on a stretcher inside the emergency room at Strong Hospital in New York. The officer has now been suspended with pay, officials said. On July 11, 2022, the EMT, who was not identified, was unloading a patient from the ambulance. The woman reportedly hit the ambulance door into the investigator’s patrol car parked in the ambulance bay. The officer asked the EMT to hand over her identification card. The woman reportedly told him that she needed to get the patient inside first.

In the video, the officer can be seen approacing the EMT as she stands next to the patient. The investigator then pushes the female EMT, spins her around, handcuffs her and then escorts her outside. The woman was released later and no charges were filed.

RPD Chief David Smith released a statement and said the police department launched an internal investigation into the incident. The officer, who was not identified, has now been suspended with pay. He was parked there because he was planning to go inside for a case, per reports.

According to News10NBC, the Locust Club released the following statement:

“The decision to suspend the investigator is perplexing. The incident in question reached a mutually acceptable resolution that day when both the investigator and the EMT were able to jointly discuss the reasons for their actions, and both accepted each other’s explanations. Chief Smith has the authority to administratively transfer an officer for 60 days while an incident is under an initial investigation, which he chose to do.

To now change that investigator’s status to suspension is without reasoning and gives the appearance that the investigator’s actions have already been judged or determined to be without merit. There is no indication that any additional information has been discovered. Supervisors from both RPD and Monroe were on scene and mutually agreed that both parties understood why each other took the actions they did.”

According to ABS, the chief information officer at Monroe Ambulance, Chris Dewey, said: “While this incident is still under internal investigation, our review of the video footage of the event shows the safety of both our employee and that of her patient were jeopardized by the action of the officer. Our employee showed sound decision making by prioritizing the care of her patient and it is the expectation of all our care providers to do the same.

We would, however, appreciate resisting derogatory comments against RPD as an organization. This incident was perpetrated by a single individual and subject to investigation by his employer, everyone is entitled to due process regardless of opinion. We trust that the matter will be disposed of appropriately and responsibly.

Furthermore, we do not believe the behavior of the officer aligns with the values of RPD leadership and should in no way condemn the rest of the brave brothers and sisters in blue. We are eager to learn of the outcome of RPD’s official investigation.”

Local Black civil rights activist, Mike Johnson, told Spectrum NEWS 1 that he already spoke with the EMT and are supporting her. Mike Johnson reportedly said: “This is just evidence that Black people, Black women, are often victimized, even in the most extraordinary circumstances. This victim was just doing her job.”

The CRPAB released the following statement:

“The Police Accountability Board has been made aware of an incident involving a RPO that occurred recently at Strong Hospital. We are in the process of reviewing the information. Incidents like this, along with the nearly 100 additional reports the PAB received since opening our doors, continue to highlight the need for independent investigations into allegations of police misconduct.”

A @RochesterNYPD investigator parked his car in the ambulance bay at Strong, an EMT from @MonroeAmbNY hit the door while unloading a patient.
The investigator insisted on ID, the EMT insisted on bringing the patient inside. This is exclusive video of what happened next ⬇️ pic.twitter.com/2gPVvrokRF