News WeekOcean Club Party
Home News “We didn’t know vaccination expires”, Student, who woke up with temperature and pain in... 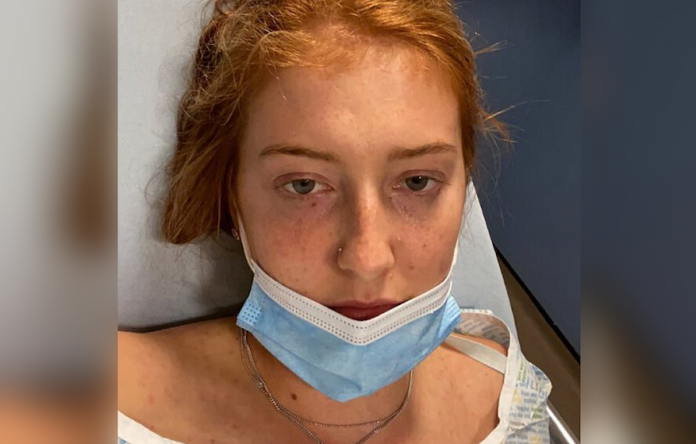 The young student, who woke up with temperature and pain in her limbs, thought she had COVID-19 before she was diagnosed with a life-threatening disease and was given 1 in 10 chance of survival. The 19-year-old woman initially thought she had COVID, because her flatmates contacted the virus previous week. Luckily, she was able to get medical treatment immediately, which meant she has suffered no lasting damage. When the student arrived at the hospital, she became so ill she was unconscious. The following day, she was admitted to the infectious disease unit at the hospital, where she stayed for 5 days.

The 19-year-old student, Alice Jenkins, told Newsweek that she woke up on May 18 with temperature and pain in her limbs. The young woman initially thought she had COVID-19, because her flatmates contacted the virus previous week. Later that day, she called her  58-year-old mother Sarah and told her that she wasn’t feeling so well. The student also believed that the muscle pain was because she fell over a few days before. When Alice woke up from a nap, she also had a rash.

Her mother told her to do a ‘tumbler test’, which means the person needs to press a glass against the rash to see if it disappears. But, unfortunately, the rash didn’t disappear and the student went to the hospital. Alice’s mother said that she was familiar with the symptoms of meningitis because her neighbor’s daughter had died of it at 14 years old, the Mirror reports.

Luckily, the 19-year-old student was able to get medical treatment immediately, which meant she has suffered no lasting damage. When she arrived at the hospital, Alice became so ill she was unconscious. The following day, Alice was admitted to the infectious disease unit at the hospital, where she stayed for 5 days.

On May 24, doctors told her that she can go home, but she will need a hearing test in a month. Now, the 19-year-old student and her mother Sarah want to make other young people aware of the risks of the deadly illness.

Alice Jenkins reportedly told The Mirror: “If I hadn’t have had the rash I wouldn’t have gone into hospital, all I had was aching limbs and a temperature. The week before my flatmates had Covid, the typical symptoms of meningitis like a stiff neck and being sick didn’t start until I was in hospital. When I got into hospital they put me on antibiotics, steroids and antivirals, without knowing what it was.”

The doctors told Alice that a lumber puncture test revealed that she was suffering from meningococcal group B. The student was vaccinated against it when she was around 14. Now, the young woman urges other young people to check whether their vaccinations had expired and to book a booster if they had.

Alice Jenkins also said: “I didn’t have a headache until I got into hospital, or a stiff neck, or throwing up. When they did a lumber puncture they said I could be paralyzed or get septicemia, or lose fingers or toes, or get hearing loss, or brain damage. They had to keep me away from people because meningitis is contagious, it was pretty lonely but I had a Percy Pig toy with me. Because I slept so much it was less lonely.

It is scary – I was planning to go clubbing on the Wednesday but I woke up and didn’t feel that well, and within five hours I was in hospital. We are more aware as a family because we know someone who died from it, but we didn’t know vaccination expires. My chances were 1 in 10, but I feel completely myself now.”