News WeekOcean Club Party
Home News Woman says doctors suspected she had COVID-19 when she was feeling breathless and she... 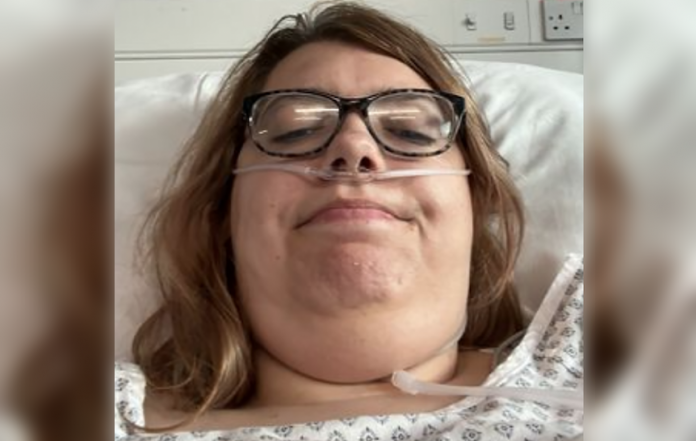 The 28-year-old woman says that doctors believed she was suffering from COVID-19 when she was feeling breathless and she initially thought it might be down to being stuck indoors during the pandemic lockdown. The doctors told her to go to the hospital where she had blood tests and further checks. It was later confirmed that she did not have COVID-19. Unfortunately, her symptoms were actually a sign of cancer. The young woman is now urging anyone who has symptoms or who has concerns to get checked.

The 28-year-old woman, Jade Colburn, said that she started to feel like she couldn’t catch her breath in July 2020, according to the hospital officials.

Unfortunately, the young woman initially thought it might be down to being stuck indoors during the pandemic lockdown.

She was later diagnosed with bowel cancer.

During an interview with the Mirror, Jade Colburn, reportedly said: “I had right side colon cancer so my symptoms are very different to what you would expect. I couldn’t catch my breath.

I thought ‘maybe it’s the weather or being stuck indoors’ because it was in the first lockdown. I just couldn’t breathe, so I spoke to the doctor. They treated it like I might have Covid but I tested myself and I was not not Covid positive.”

The doctors then told her to go to the hospital where she had blood tests and further checks. It was later confirmed that she did not have COVID-19.

The unfortunate woman then had an X-ray and a CT scan which found a bilateral pulmonary embolism.

According to the health officials, this usually occurs when a blood clot gets lodged in an artery in the lung, blocking blood flow to part of the lung.

Jade also said that she was feeling good until October 2020, but soon she noticed that even walking five minutes to the local shop would leave her breathless.

Even a 5 minute walk to the store would take her 15 minutes and she would even have to take a break from walking twice.

The young woman called her doctor, after she had the all clear for her clots, who reportedly told her that she could have a viral infection and again she was advised to get a COVID test.

Just 2 months later, she said her legs turned to ‘jelly’ and she collapsed. Her mother took her to the hospital. The doctors told her that the blood tests showed her hemoglobin levels were very low.

So, the doctors told her to stop taking blood thinning tablets and instead was put on iron supplements.

In June 2021, Jade tested positive for COVID-19. She told the Mirror that she was struggling to breathe again and ended up back in hospital.

The radiologist noticed something on the right side of her colon, so she was booked in for a colonosc0py.

The doctors told her that she had cancer, before the diagnosis was confirmed by biopsy results.

Jade also said: “I was in a weird mindset, as a diagnosis helped me to understand the issues I had, it was not just in my mind, and we finally knew what had caused my illnesses. But on the other hand, it was scary as I had lost my grandad to cancer, so for me at the time, I related it to death.”

The brave woman underwent surgery at the end of September and by mid October she was given the all clear.

Now, the 28-year-old woman from the UK wants to raise awareness of her diagnosis in order to help others.

During an interview with the Mirror, Jade Colburn, reportedly said: “A lot of people forget it can affect people from a younger age so my main message is if you do feel ill go and get checked out.”

Jade urges anyone who has symptoms or who has concerns to get checked.

“A huge thank you to Jade for bravely sharing her story and raising awareness of colon cancer, and I also commend our wonderful, dedicated staff for their support and professionalism.

“Most people with symptoms do not have bowel cancer, but it’s absolutely crucial to see a doctor if you do. Like Jade, you may be scared, but if caught early, bowel cancer is treatable and curable. Please do get checked out.”