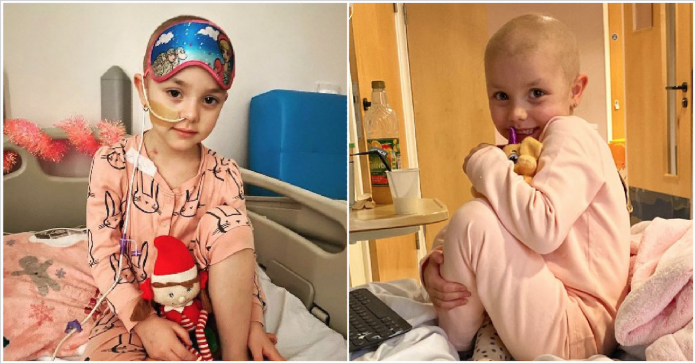 According to reports, the 6-year-old girl has been given a 50% chance of survival after her stomach ache turned out to be an aggressive and rare form of cancer. She has been battling cancer for six months and her parents are desperately seeking treatment from abroad. Her family reportedly found a vaccination that is given in New York and it can reduce the risk of the cancer returning and will increase her chances of living a longer life.

The 6-year-old girl from UK, Isabelle Grundy, was a happy child before her life-changing diagnosis in the summer of 2021, according to reports.

Unfortunately, the little girl reportedly woke up complaining to her 33-year-old mother, Louisa Moss, that she had a stomach pain and she was off school. But, her condition became much worse throughout the day and her mother reportedly found a lump on the left side of her stomach.

“It was quite sudden, previous to this day, I noticed she was tired but I can’t say that she was ill- when it’s your own kids you pick up very quickly if it’s anything more.

This lump that I found in Isabelle’s tummy it wasn’t an obvious lump and not somewhere you would go poking and prodding – I just couldn’t believe it.

I kind of knew when I felt the lump and did a bit of research, I knew then and there that it wasn’t going to be good news – at the same time I was doubting myself thinking no it can’t be because of how well she’s been.”

The 6-year-old girl was seen by multiple doctors and specialists before she was diagnosed with a Stage 4 Neuroblastoma. Doctors told her mother that this condition comes with a 50% survival rate.

Since her diagnosis, the 6-year-old child has undergone a lot of intensive treatment, ranging from high dose chemotherapy, numerous cannulas, platelet transfusions and a high-risk surgery where only a small section of her tumor was safely removed through stem cell harvest and transplant, according to reports.

Unfortunately, on Dec. 23, the girl was sent to the Paediatric Intensive Care Unit after feeling ill again. Since being back at hospital, Isabelle has been up and awake more each day and continues to respond well.

Her family says that the young girl still has a 50% survival rate as they are looking for other options abroad. They reportedly found a vaccination that is given in New York and it can reduce the risk of the cancer returning and will increase her chances of living a longer life.

“Getting this vaccine, would mean the absolute world, it would mean that Isabelle has a future because right now we don’t know if she’s even got one. It just means the world to us if we can get this money raised and get her to America.” the 33-year-old mother said.