News WeekOcean Club Party
Home News Doctors told the mother that her baby’s sickness ‘was probably down to... 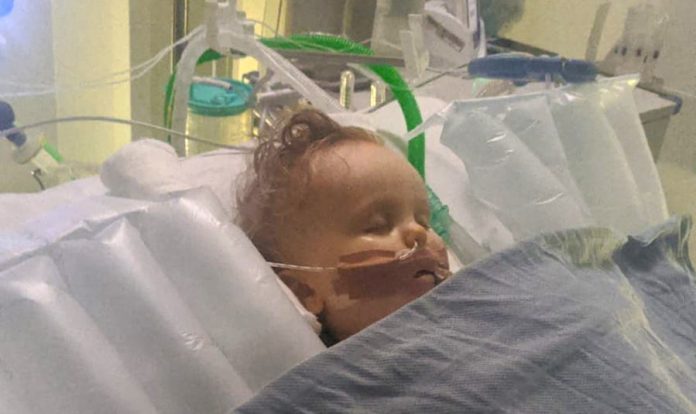 The 25-year-old mother claims her infant son nearly lost his life after his sickness was dismissed by doctors as a constipation. The medical personnel reportedly told the mother that her baby’s sickness was probably down to a change in his formula milk and it could be constipation. Unfortunately, just few days later, the little boy started having seizures and became unresponsive. Paramedics rushed him to the hospital where scans revealed an abscess on his brain and he was rushed to surgery. The young mother is sharing her story so no other parent has to go through this. “If your child is not himself, very sleepy and sick off his food etc. DO NOT just accept a verdict that you know in your gut isn’t right. You know your child better than anyone else.” the mother reportedly said.

The young mom, Amie Tweed, told Daily Mail that she took her 1-year-old son Teddy to the hospital on March 14 after the child started vomiting. The baby had also struggled to stay awake for six days, his mom said. Tweed also said that her doctor told her to go to the ER and ask for a blood test, but doctors refused to give him one because he was not displaying other symptoms, the unfortunate mother said.

The medical personnel reportedly told the mother that her baby’s sickness was probably down to a change in his formula milk and it could be constipation. Unfortunately, just few days later, the little boy started having seizures and became unresponsive. Paramedics rushed him to the hospital where scans revealed an abscess on his brain and he was rushed to surgery, The SUN reports.

The doctors then told the mother that her baby might die if they could not reduce the swelling. Luckily, the surgery was a success. The medical personnel told Tweed that the abscess was probably caused by a bacterial infection that had somehow reached his brain.

During an interview with the Daily Mail, the 25-year-old mother reportedly said:

“He started not being his usual bubbly self about two weeks before everything started to turn south. He was just not interested in playing with his toys as he used to be and just a little bit more cranky and I couldn’t really settle him as well. All he wanted to do was sleep. He’d wake up from a night of 10 or 11 hours sleep and would want to go straight back to sleep, which is just very abnormal.”

The mother then took her son to a hospital and her doctor told her to take him to the ER for a blood test if his unexplained sickness continued for another 24 hours. Tweed then took the little boy to ER, but the medical personnel refused to do a test because he wasn’t showing any other symptoms, like a fever or sore throat.

Amie Tweed also said: “They asked if anything in his diet had changed and I mentioned his formula milk had been swapped to a different brand because they had a recall, and they said they thought it was probably something dietary. He said, “it could be constipation, he just needs to get some rest” and I asked if it was normal for that to make them this poorly and apparently it can.

So I’m just taking the doctor’s word for it but I only left it for a day and the next morning I was on the phone to the GP anyway. I said to the GP “this still isn’t right, I don’t believe that this is constipation”. I couldn’t understand how constipation can make you violently sick but I suppose I don’t know I’m not a doctor, all I have is my trust in them.”

Tweed then took Teddy to a pediatric ward where doctors found he had an infection and gave him oral antibiotics. Unfortunately, just 14 hours later, the baby’s symptoms worsened. The boy’s parents then called an ambulance and took the boy to a hospital. The baby started having seizures and the doctors noticed that one of his pupils was dilated, indicating there was pressure on his brain.

A CT scan revealed that the 1-year-old boy had a large swelling and was sent immediately to surgery.

Amie Tweed also told Daily Mail: “One of the surgeons pulled me into the room and said “we’re going to do what we can to help him but I can’t guarantee everything. We’ll try out best”. We got a call within 40 minutes of surgery and they said that he was going to be ok. I think that was just the best call that I’ve ever had. They said that he had an abscess in his brain and they’ve drained it and they need to monitor his recovery, but because of the pressure on his brain they didn’t know if there was going to be any lasting damage.

We were obviously over the moon. We’d gone to hell and back but he was going to be ok. That was the main thing for us. But in the back of your mind I thought — is he going to be able to talk? And use his arms and legs? We just didn’t know what repercussions were going to come from it. The abscess was about a third of the size of his brain. It was huge.“

After the surgery, the doctors told the parents that the abscess was around 100ml and the little boy had another operation to drain it again on March 24. Teddy is recovering well and  he hasn’t really had any lasting damage from this, it’s maybe pushed him back a couple of weeks in his development but we can deal with that, his mom said.

The mother also said that what appeared to be an ingrown hair on her son’s nose since birth was actually an additional tract to his brain, and bacteria traveling through it caused his abscess.

The 25-year-old mom from the UK shared her story on her Facebook profile:

“If your child is not himself, very sleepy and sick off his food etc. DO NOT just accept a verdict that you know in your gut isn’t right. You know your child better than anyone else.

Had he been sent for a CT scan whilst his admission at hospital, this could have been identified and the risk to his life drastically reduced. The scan only took 5 minutes. We do not want any other family to have to go through this so please share this to raise awareness of signs of brain abscesses.

Teddy is now on the mend, his recovery is impressing all of the consultants, and he has an amazing team around him trying to make him better and find out exactly where this came from.”