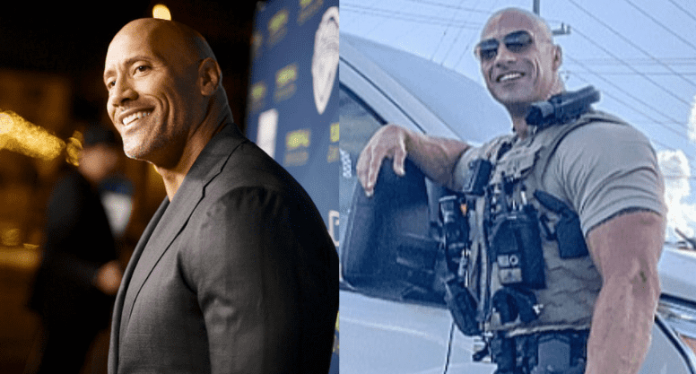 Two is better than one, especially if it’s “The Rock” times two. Dwayne ‘The Rock’ Johnson has found his doppelgänger, and the resemblance is so uncanny that even the actor, himself, is pleasantly surprised.

“Oh sh*t! Wow,” Johnson wrote on Twitter after coming across a social media post that pointed out how similar they look. The doppelgänger from Alabama is Eric Fields, a Morgan County Sheriff’s Office Patrol Lieutenant, who has been doing his bit to keep the streets safer for 17 years.

The dedicated police officer can also see the similarities and said his resemblance to the actor has been a “running joke” in his life for the past few years. “I’ve been called The Rock and Vin Diesel’s love child,” the 37-year-old officer said. “I go along with it. It’s humorous. It’s flattering. It could be worse people, I guess.”

Some people ask him if he can do an impression of Johnson and Diesel, and officer Fields does whatever he can to humor them. When the internet introduced Johnson to Fields, the actor wrote on Twitter: “One day we’ll drink @Teremana and I need to hear all your ‘Rock stories’ because I KNOW you got ‘em.”

Recently, on August 21, the Morgan County Sheriff’s Office wrote that somebody asked one of the department’s officers if he could meet the Deputy that looked like Johnson. And once Fields heard the request, he happily obliged and drove to the local Walmart to meet him.

“This gentlemen recently ran into our Sgt. Mason and informed him he wanted to meet our Deputy that people say looks like ‘The Rock,'” the police department wrote on Facebook. “Sgt. Mason passed that along and Lieutenant Fields was happy to swing by the Hartselle Wal-mart to see him. Tyler is one of their many hardworkers and it was great to meet him and some of his coworkers!”

Fields had learned that the Walmart employee is a huge fan of the onscreen action hero and was glad his resemblance put a smile on the employee’s face.

“The blessing was really for me because he had a spirit that was just such a great person to meet.,” Fields said. “He’s the real celebrity. Everybody knew him and loved him. It was a blessing to me. I go trying to bless someone else, and I come out with the blessing of meeting him. I wish the actual Rock could meet this kid. He’s the hometown hero.”

The one thing that Fields is most content about the resemblance is seeing how it helps him connect with the community. “We really love to get involved with the community, cut up and be neighbors — not just enforcement,” he said.

“I don’t want to disappoint anybody,” the officer continued. “I walk up one day and at a different angle, I don’t know. It’s flattering, but it’s also a little nerve-racking as far as what others expect I guess. I just plan on being me. I’ll cut up. I’m a big cut-up. If it comes up and somebody says that, I’ll play along. I really couldn’t be anybody but me. I’m just glad I could be part of someone’s happiness and laughter.”