News WeekOcean Club Party
Home News Family of a man who had COVID when he first started having... 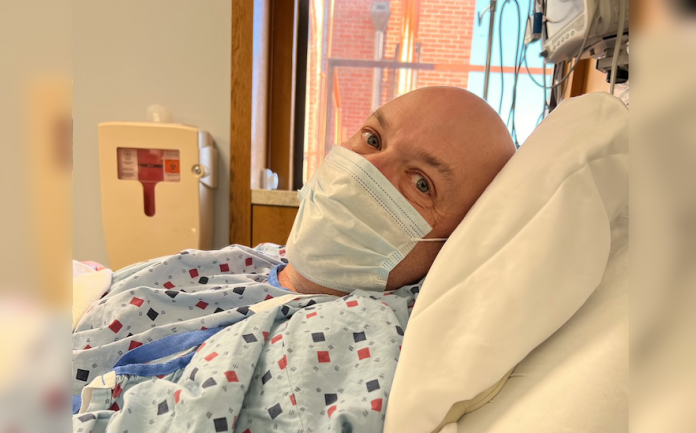 When the 59-year-old man contracted COVID-19 in 2020, he started having speech problems. His wife, who is a nurse practitioner, wondered if it was a persistent symptom of the Coronavirus. Unfortunately, the man struggled finding words and went to a see a doctor. After an MRI scan, he was diagnosed with an aggressive cancerous brain tumor. “It’s a malignant brain cancer. That means it comes from a cell in the brain and it never really leaves the brain. It stays in the brain, but it spreads throughout the brain and that’s what makes it universally lethal. So it’s an incurable brain cancer.” the vice chair of neurosurgery and director of the brain tumor center at the hospital reportedly said.

The 59-year-old man from New York, Bruce Lowder, told TODAY that in June 2021, he reportedly struggled finding words. Just few days later, his symptoms got worse and his 55-year-old wife, Meredith, scheduled him a doctor’s appointment. The couple told the doctor that Bruce was having a lot of trouble remembering words and the doctor recommended that he should undergo an MRI. Unfortunately, the 59-year-old father of two was diagnosed with a glioblastoma, which is an aggressive cancerous brain tumor.

Just 6 months before his diagnosis, the 59-year-old man contracted COVID. So, when he first started having speech problems, his wife wondered if it was a persistent symptom of COVID-19. The 55-year-old woman, who is is a nurse practitioner, didn’t think that Bruce had a stroke because he didn’t have any one sided weakness or facial drooping.

During an interview with TODAY, the vice chair of neurosurgery and director of the brain tumor center at LHH, Dr. John Boockvar, reportedly said:

According to Meredith, her husband’s tumor was reportedly on the left side of his brain and in his speech center, which was why he struggled to find words. She also said that Bruce understands everything people say, but, unfortunately, is not always able to locate the accurate words to respond. The 59-year-old man underwent a surgery and doctors removed as much of it as they could. He then started radiation with chemotherapy.

After few months, Bruce’s symptoms began to appear again and the surgeons recommended another surgery. The unfortunate man experienced seizures and was not able to drive.

According to Dr. John Boockvar, sometimes chemotherapy is not effective against brain cancer because it can’t get past the blood brain barrier, which humans have to protect their brains. Dr. John Boockvar is reportedly examining a way to bypass it by using pericranium tissue, which lays under the scalp but above the skull.

With this procedure, doctors remove the tumor and use the peri-cranial tissue in the cavity, hoping that it will integrate itself in the brain tissue. And, according to Dr. John Boockvar, if this procedure is successful, chemotherapy could get directly into the former tumor site in the brain.

According to TODAY, the second clinical trial that the 59-year-old father of two participated in uses microcatheters to direct a high dose of a drug that’s effective against glioblastoma.

Right now, Bruce and his family hope that these clinical trials will give him more time with his family and a better quality of life.

“That may save somebody’s life. That may save a child’s life. Maybe our story will give someone else (hope) knowing that we’re not alone, knowing that there’s other people out there going through the same thing.

It’s been a challenge. I’m not going to lie. It’s definitely affected everyone. I have a very supportive family. The hardest thing is nobody can go through the grief except you.”