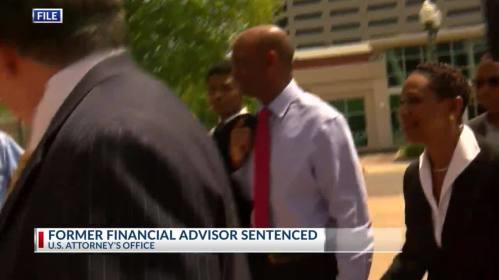 A former Shreveport financial advisor has been sentenced to six years in a federal penitentiary after bilking investors out of $3.5 million, according to acting U.S. Attorney Alexander Van Hook.

Gregory Alan Smith, 58, was sentenced Tuesday by U.S. District Maurice Hicks, Jr. to 72 months in prison followed by three years of supervised release for conspiracy to commit wire fraud. In addition, Smith was ordered to pay restitution in the amount of $3,588,500, as well as a fine of $100,000.

Court documents reveal Smith received $1.08 million of the total $3.5 million and used it to pay down loans, purchase two luxury sport utility vehicles, place a down payment on a vacation property, and maintain his lifestyle.

According to court documents, Smith persuaded multiple victims to invest the approximately $3.5 million with his co-defendant, Kirbyjon H. Caldwell, pastor of a Houston megachurch.

In evidence presented to the court, Smith began approaching existing clients, friends, and acquaintances in the spring of 2013 about an investment opportunity in historical Chinese bonds. Smith told these potential investors that they would be obtaining a partial ownership interest in the bonds and that they would receive exponential returns on their investments in a short period of time.

Smith, neglected, however, to tell these individuals that historical Chinese bonds, which were issued by the former Republic of China prior to losing power to the communist government in 1949, were worthless.

The bonds, instead, are considered by the Securities and Exchange Commission to be  collectables with no value outside of the memorabilia market.

After Smith made the fraudulent pitch, victim-investors who believed and trusted Smith agreed to invest in these bonds.

The victims were provided with a “participation agreement” indicating that if the sale of the bonds failed to occur within a certain number of days, the invested funds would be returned within a defined period of time.

The victims then were instructed to wire funds to various bank accounts held by or controlled by Caldwell or his representative.

Those funds were then divided between Smith, Caldwell, and others.

“This case proves that even those you trust to have your best interest at heart sometimes may not. The victims in this case thought their trusted advisor and friend would never lead them astray but sadly, he was merely a con man who led them down an unwanted path,” Van Hook said.

“Our office will continue to be vigilant in holding defendants such as this accountable for their fraudulent actions.”

The FBI conducted the investigation and the case was prosecuted by Seth Reeg and C. Minonne Griffing, assistant USAs.

Caldwell is scheduled to be sentenced Dec. 3.