News WeekOcean Club Party
Home News “I had to do something no parent should ever have to do”, Mother... 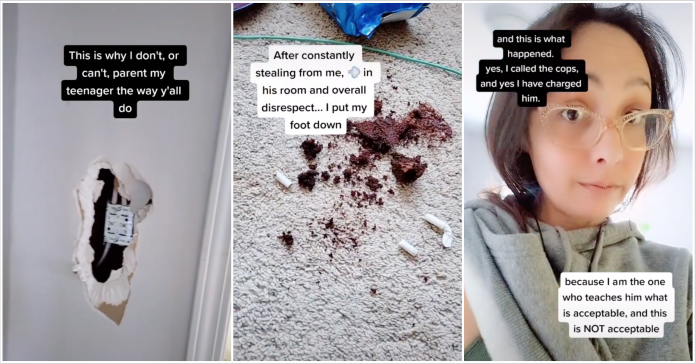 As all parents know by now, raising children is not easy, especially if you are a parent with multiple kids. This mother’s parenting methods are being debated after she called the authorities on her misbehaving son. The unfortunate mom shared a video on her social media account revealing what she had to go through while raising her teen son. “So today I had to do something no mother or father should ever have to do. This is why I don’t, or can’t, parent my teenager the way y’all do.” the mother said.

In the short video, the mom shows a hole in the wall which has left the electrical wiring exposed, sheetrock crumbled on the floor, a messy room with stains and bits of food and cake on the carpet as well as the ground which is ridden with cigarettes butts, a box of cookies and a plate.

The mother, Amber, explains the situation with a text overlay that reads, “So today I had to do something no mother or father should ever have to do. This is why I don’t, or can’t, parent my teenager the way y’all do.

After constantly stealing from me, [smoke emoji] in his room, and overall disrespect… I put my foot down.” At the end of the video, the woman reveals her decision to call the cops for his disruptive behavior. “And this is what happened. Yes, I called the cops, and yes I have charged him,” she noted.

According to Distractify, the video ends with Amber revealing a bruise on her right arm as the text overlay reads, “Because I am the one who teaches him what is acceptable, and this is NOT acceptable.” There were many who supported the mother’s decision to get the police involved and some even added that they have personally benefitted from such “wake-up calls” early in their lives.

“My little brother was the same way. We had to put him in a home, but you know what. he’s doing amazingly. He’s recognized that what he did wasn’t good, we still love him and now he’s figuring himself out mentally and has a baby on the way.

It turned his life around,” wrote one user. There were others who didn’t really think that calling the police was the best thing for a child to do.

They advised the mom to make sure that her son actually received the help that he required and not just a criminal record that would hold him back.

“Make sure he gets help, not just a record,” shared one to which the mother responded, “I enrolled him in the Diversion Program. If he completes it then the charges are dropped.”

There were some who blamed the mom for her son’s behavior but others were quick to point out that it is easy to blame and judge others when they haven’t been in the situation themselves.