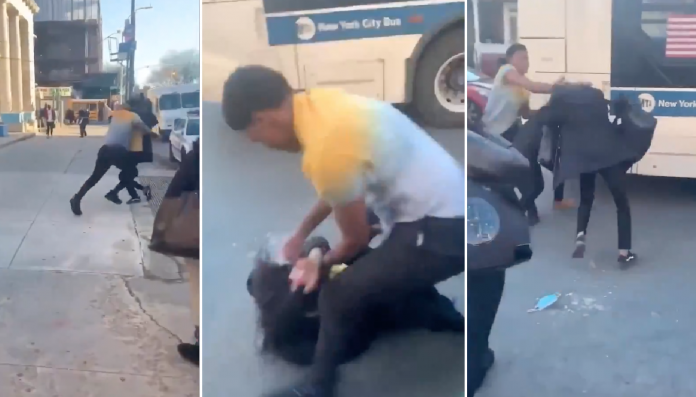 Mother claims the high school officials and educators failed to properly intervene when her 15-year-old transgender daughter was bullied by classmates on social media and got physically assaulted by a classmate’s family member. The mother claims that her 15-year-old transgender child notified a teacher and a guidance counselor at the school of the bullying. However, the high school staff never told the victim’s mom. “My client has a god-given right to attend public school free of discrimination and bullying on account of gender identity, and the Department of Education needs to do better,” the mother’s lawyer said.

The mother from New York City, Ronette Hinkson, filed a lawsuit with the State Division of Human Rights against the city and the W. H. Maxwell Career and Technical Education High School. The mother said her 15-year-old transgender daughter was beaten up by a classmate’s cousin on Jan. 18 as she was leaving school.

According to the New York Post, in the video, students can be heard cheering on as the transgender student, only identified as M.B., is thrown to the ground and repeatedly punched and slapped by an unidentified teen.

The mother claims that her 15-year-old transgender daughter notified a teacher and a guidance counsel at the school of the November bullying. The high school staff and educators never told the victim’s mom or the police.

The 46-year-old mom, Ronette Hinkson, told the New York Post: “I’m almost in tears now thinking about my child going through a transition from being born as a male and to now have a life like this where people don’t understand and want to hurt my child for no reason. I’m a very involved parent so to know that I couldn’t protect my child in a situation like that, it hurts.”

The 46-year-old mother also said that it was heartbreaking for her to watch the video. She also said that the video was posted on social media before being texted to her transgender daughter.

The 46-year-old mother also said: “My child was being bullied and reported that to the guidance counselor in the school. The hope is that the counselor would have done the right thing and pulled everyone together and resolve the issue.”

The mom said that the social media bullying and the physically assault has made her transgender child more distrustful of people and more of a loner.

According to the lawsuit, not one person from W. H. Maxwell High ever let the 46-year-old mom know that her minor child was being harassed and physically threatened at school.

David Rosenberg, the victim’s lawyer, released the following statement: “My client has a god-given right to attend public school in New York City free of discrimination and bullying on account of gender identity, and the Department of Education needs to do better.

This vicious physical attack on a 15-year-old child would have been prevented had the Department of Education notified my client that her transgendered daughter was being bullied at school on account of gender identity.”

Sarah Casasnovas, spokesperson for the Department of Education, released the following statement: “Bullying and harassment have absolutely no place in our school communities. We take such allegations and the safety of our students very seriously and will review the complaint. Our schools must be sanctuaries for our young people as they grow academically and socially.”

You can watch the full video here. The video was obtained by the New York Post. This incident remains under investigation. This is a developing story and it will be updated as new information become available.