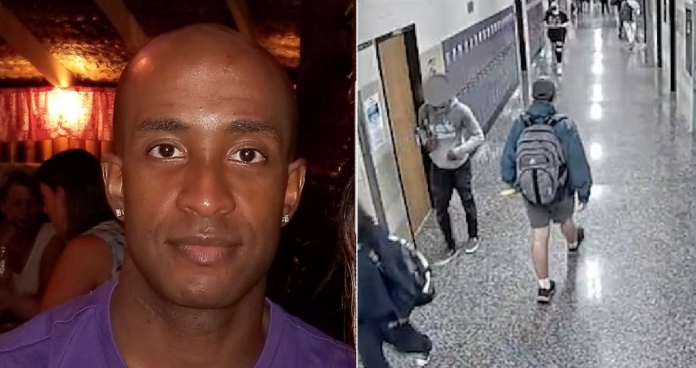 Black teacher claims a white student placed a banana in his classroom doorway for months. He is now suing the tenth-grade student. The high school history teacher says he is suing the white student after surveillance video caught the student leaving a banana in the doorway of his classroom for months. The educator is now suing the 10th-grader, alleging repeated acts of racism in the high school. The man is reportedly one of the few black teachers at the predominately white high school and has claimed the recurring gesture was an obvious act of harassment.

The high school teacher, Joel Mungo, told WAVY 10: “Someone left a banana at my door. The banana was perfectly placed in the doorway.”

Unfortunately, the incident soon became a reoccurring incident – with the banana placed in the same spot at least once a month. After several instances, the educator said he had enough.

Per reports, Mungo, who had been teaching for 21 years, is reportedly one of the few black teachers at the predominately white Virginia high school and has claimed the recurring gesture was an obvious act of harassment.

Unfortunately, bananas have been used as a form of debasement towards black people, meant to liken them to monkeys who are known to eat the fruit, the gesture overladen with racist overtone.

According to the school officials, an investigation led to surveillance footage showing one of the teacher’s white students walking down the hallway with the fruit in hand. The high school teacher reportedly gave the student an opportunity to confess. But, the boy denied any involvement.

The high school teacher, Joel Mungo, also told WAVY 10: “I gave the student a chance to come clean. I asked him, ”Hey did you do this?” He said ”No,” he played dumb,  “No idea what you’re talking about.” So I said “OK, go down to the assistant principal.” I’m the only Black teacher he has. He has six other teachers. No other teachers were involved.”

The teacher also said that he contacted the student’s parents. Initially, they were embarrassed. But, they reportedly became irate once their son was suspended for two days.

According to the lawsuit, the racist act has disturbed the high school teacher so much he is now pursuing legal action.

Joel Mungo also said: “I’m just fed up with the racism around, especially at our academic institutions. Coming from the HBCUs and other colleges, the bomb threats, the nooses, the bananas and now it’s streaming into public education.

It’s time to take a stand and just let people know it will not be tolerated. I know I’m not tolerating it. You have to speak up. You can’t allow it to go on because then it will just continue to go on.”

According to Newsweek, attorney Ali Shahrestani said that the teacher would probably have a better case against the school as opposed to the student himself.

Ali Shahrestani reportedly told Newsweek: “If I were counsel in the matter, I would advise the teacher to consider a lawsuit against the school for supporting a hostile work environment via its negligent failure to dole out a reasonable punishment.

A two-day suspension is what a student should expect when he cheats on a test or gravely insults another student. It sends a terrible message to other students, teachers, and the community when a student gets a slap on the wrist like this for such a disgusting series of alleged actions against a teacher.

The fact that the student’s parents allegedly had the audacity to be upset by a two-day suspension might reflect the lack of sincerity of their initial alleged apology on his behalf.”