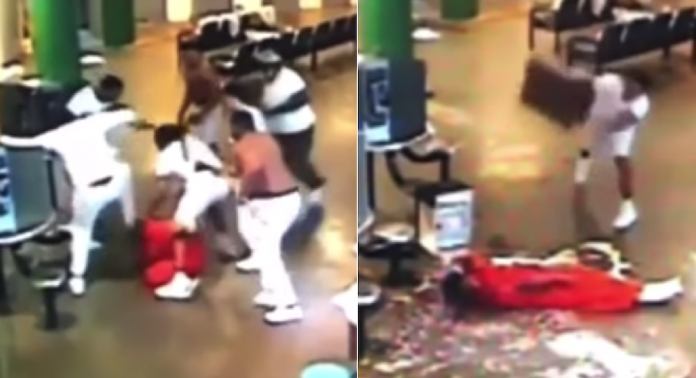 According to the lawsuit, the 22-year-old was left paralyzed from the waist down and still recovering from severe brain injury after a group of inmates at the county’s correctional facility attacked him. He claims the county failed to protect him while in their custody. The man claims in his lawsuit that the jail officials subjected him to unsafe conditions of confinement, that correctional officers failed to intervene in the attack, and that he received inadequate medical care. No jail staff intervened and the man ended up in a coma for two months, the lawsuit states.

The 22-year-old man, who is reportedly schizophrenic, was placed in a gang unit in September after missing a hearing for incidents with his family at home.

A surveillance video, that was shared on social media, shows multiple inmates kicking Boyd and stomping his head and then leaving him on the ground unconscious. They each returned later and threw a microwave oven, multi-gallon beverage dispenser, water cooler, trash can and industrial mop bucket on his motionless body.

According to the lawsuit, Boyd was in a coma for two months. Now, he is paralyzed from the waist down and still recovering from severe brain injury.

“The likelihood that he will ever return to ordinarily functioning is virtually non-existent. Mr. Boyd has been deemed incapable of managing his own affairs.” the lawsuit states.

No officers intervened. All seven men were charged with the assault, officials said.

According to NJ, Steven Young, president of the National Action Network South Jersey, reportedly said: “What happened here was a human rights violation. If it was a dog beaten that bad, they would lock everyone up. This was a human being.”

Per reports, the 22-year-old man was held in the jail in 2020 after his arrest for domestic incidents. Health workers noted in his medical records that he had symptoms of psychosis, aggressive tendencies and should be observed closely due to his mental health issues.

But, when he returned to the correctional facility, a health worker noted that Boyd had no history of violent behavior and had never been treated by a psychologist or psychiatrist.

The 22-year-old man was placed in a gang unit of the jail on Sept. 23, according to the lawsuit. The inmates reportedly attacked Boyd for reasons that remain unclear.

According to the lawsuit, while the group of inmates were ambushing Boyd, the officer in charge of the unit ran in the other direction. The lawsuit reportedly says Jeremy Alvarado ran down the hallway and away from the attack instead of helping Boyd.

Boyd arrived at the hospital over an hour after the attack, the lawsuit states.

The beating left Boyd in a coma for 2 months with several facial fractures. Boyd is now paralyzed from the waist down and is cared for at his mother’s home, NJ reports.

According to the lawsuit, the correctional officer, who ran away from the attack instead of helping Boyd, had not completed corrections academy training before he was assigned to oversee the unit designated for gang members. The warden and associate warden sent an internal message praising Alvarado for the way he handled the attack.

Boyd’s attorney said the correctional facility and county officials are aware of longstanding, systemic failures in the county jail. They allege that there is a pattern of inmates’ mental health and other health care concerns going unmet, ABS reports.

Many community activists have remained confounded about how correction’s officers allowed inmates to beat Boyd nearly to death.