News WeekOcean Club Party
Home News Mother claims she was diagnosed with severely disabling disorder and can’t even hug her... 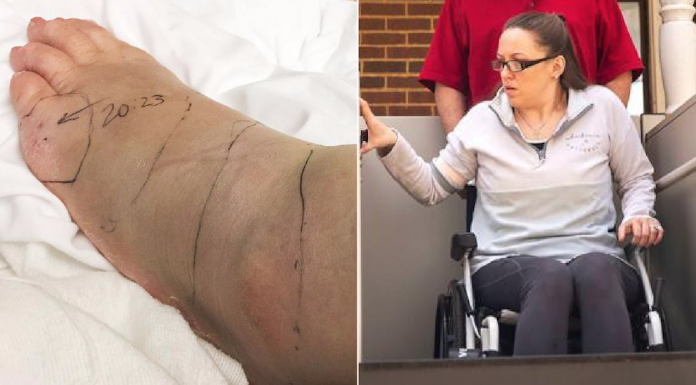 The unfortunate mother claims in her lawsuit that she was bitten by a snake as she walked into the restaurant 5 years ago. Now, she is still enduring severe pain, the lawsuit states. She was diagnosed with Complex Regional Pain Syndrome which is an uncommon and severely disabling disorder that can happen after an injury to a limb or other trauma to the body. The disorder has spread throughout most of her body causing a drastic over-sensitivity to pain. It actually means that her nervous system can’t shut off its pain signal. The woman reportedly tried different treatments and has seen dozens of doctors, including heavy-duty pain pills.

According to the health officials, the Complex Regional Pain Syndrome is an uncommon and severely disabling disorder that can happen after an injury to a limb or other trauma to the body.

During an interview with NBC12 News, Rachel Myrick reportedly said: “I have more than 75 percent of my body that is in so much pain; that it’s almost impossible to describe. You feel like you’re burning from deep inside your bones.”

Unfortunately, the disorder has spread throughout most of her body, the lawsuit claims. Even a breeze on her skin can be painful, WSAW reports.

In 2017, Myrick and her family walked into the LongHorn Steakhouse in Virginia. Myrick claims in her lawsuit that she felt like she had been stung on her foot. Unfortunately, it wasn’t a wasp or a bee – it was an 8-inch copperhead baby snake. The snake reportedly bit her left foot three times.

Rachel Myrick also said: “I had put my hand around my foot because, at this point, it was an absolute unbearable pain. That was pretty much the moment everything changed.”

The woman was taken to a hospital for treatment and was given 4 vials of anti-venom. Unfortunately, the woman’s foot and entire leg swelled multiple times larger than normal size, turning purple and grey.

The medical personnel told her that her leg should be back to normal in a few months. But, the aching and constant discoloration persisted.

Five years after the snake bite, Myrick claims in her lawsuit that she can hardly maneuver her way out of a car without crushing discomfort and can’t even hug her children.

“I can hug them. They can’t hug me.” the mother of two reportedly said.

Myrick told NBC12 News that she can only lightly hold her arms around her children, pretending to hug them.

According to the lawsuit, Myrick tried different treatments and has seen dozens of doctors, including heavy-duty pain pills like morphine. Myrick has two spinal cord stimulators surgically implanted, the lawsuit states.

She says that her medical bills now total over $1 million.

Now, the unfortunate mother has filed a lawsuit against the parent company of Longhorn Steakhouse, Rare Hospitality International, and the restaurant manager at the time for $25 million, WSAW reports.

According to the lawsuit, snakes were also spotted in the restaurant’s storage areas for produce and high chairs and a loading area.

Myrick’s attorneys said that Virginia’s food regulation laws require pests to be controlled or minimized and that the restaurant didn’t take up the exterminator on a one-shot pest elimination service.

But, the restaurant’s attorneys claim that a party can’t be held liable for a wild animal attack in Virginia.

This means that a judge or jury may ultimately have to decide if there’s a difference between a wild animal and what would be considered a pest, like a bee, a rat or a snake.

The restaurant’s attorneys also point to a lack of detail about the alleged snake sightings.

They reportedly said that even if snakes were lurking near the restaurant, which they deny, destroying the nest would be illegal since snakes are not considered nuisance animals.