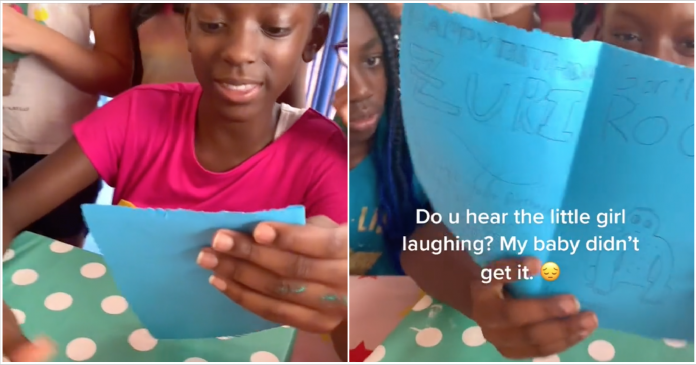 The 34-year-old black mother said her daughter was called a gorilla by a ‘friend’ in a racist handmade birthday card. She shared the throwback video on her social media account. In the video, the child is reading the racist card out loud at her birthday party. The mom also said she talked with her daughter about racism and immediately ended her friendship with the other girl. The mother of three also decided to be the bigger person and opted against confronting the child’s parents.

The 34-year-old woman from Florida, Shavonya Poole, shared a throwback video of her daughter Zuri reading a racist birthday card she received from a friend a few years ago, per reports.

According to the mom, there were drawings of what appeared to be gorillas on the front and inside of the homemade card, where the child wrote: “Happy birthday, Zuri. Gorillas rock!”

Shavonya Poole reportedly said: “I’m still trying to figure out why these racist people sent their daughter to my kid’s party?”

Shavonya Poole also said: “Did you hear the little girl laughing? My baby didn’t get it.”

The mother mentioned that gorillas had nothing to do with her daughter’s birthday celebration in any way. So, it’s clear the drawings and message were racially motivated, she said.

The mother says she decided to be the bigger person and opted against confronting the child’s parents.

Shavonya Poole also said: “Like for real though, gorillas rock that wasn’t even her birthday theme. What’s sad is these same people invited my daughter to their house for a sleepover. You think I sent her…hell nawl.”

Poole isn’t even entirely sure if it was a child who had drawn the gorillas on the card.

Shavonya Poole also said: “Who even drew this? Was it the kid, the mom, the dad, or a sibling? It’s people like this that keep racism alive in this day and age.”

The video has been viewed more than 440,000 times, and many people shared the mother’s outrage over the racist card. Many viewers believe that the child’s parents had a hand in making the card.

In another video, the mother of three also said that her daughter Zuri had received the card two years ago, but she has never been able to forget about it.