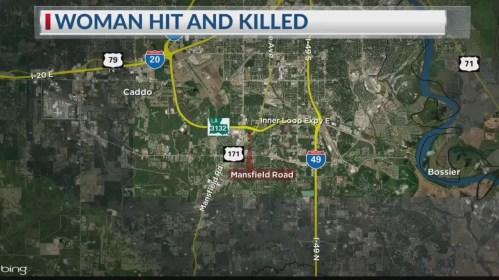 Angela Marie Ford, 60, died of injuries suffered when she was hit by a vehicle while walking in Mansfield Road.

Just before 8 p.m. Monday, SPD officers responded to a major accident involving a vehicle and pedestrian, later identified as Ford,  in the 8900 block of Mansfield Road.

Ford was take to Ochsner LSU Medical Center where she later died from her injuries.

Due to the severity of the crash, the Crash Investigations Unit were called.

In the course of their investigation detectives marked roadway evidence, took measurements and gathered witness statements.

The preliminary investigation revealed a Chevrolet Silverado was traveling northbound in the 8900 block of Mansfield Road when the driver observed what appeared to be a silhouette of a person entering the roadway.

Although the driver tried to avoid the collision, he struck the pedestrian as she entered the roadway.

The driver of the Silverado immediately stopped, pulled over onto the shoulder of Mansfield Road, rendered aid to the pedestrian, and called 911.

The pedestrian was wearing dark clothing at the time of the collision.

The driver of the truck was taken to the Shreveport Police Complex for routine toxicology testing, but impairment was not suspected.