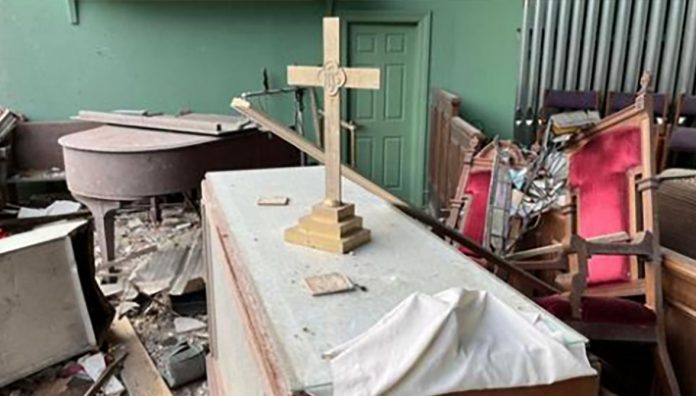 Communities are assessing the catastrophic damage caused by a series of tornadoes that ripped through six states over the weekend. In Kentucky, one of the hardest-hit states, First Christian Church is close to collapse. But amidst the damage one artifact stood perfectly intact – an altar carved with Leonardo da Vinci’s famous painting, the ‘Last Supper.’

Senior minister Dr. Milton West reportedly said that following the tornado, the structural integrity of the building was so bad it’s close to collapsing.

The church uses the impressive piece for their communion.

“It’s the center of our worship experience,” Dr. West, said. “It survived along with a cross that sits on it.”

But with the possibility of the whole building collapsing, he said saving the altar would be a top priority.

“Our goal for the day is we hope to get it out of the building and preserve it along with a few other artifacts. Our building is rapidly losing what little structural integrity it has left, so we are going to try to get at least that out today before we do anything else,” he said on Monday.

At least 74 people were killed in Kentucky along with dozens unaccounted for after the state suffered “the worst tornado event” in its history.

“We grieve, we cry and we hug and we pull ourselves together and go to the next step of trying to recover and rethink where we want to be as a church, but our people have stayed strong during all of this,” West said.

Two days after the tornado hit, the congregation gathered for a prayer service in the church parking lot.

“I think they’re beginning to cope with the reality of what has happened, and they’re certainly grieving and sad over the loss,” West said. “We are doing what we can to keep people’s spirits up.”

One positive in the devastating aftermath is the way the community has come together to help each other.

“I think this gives people an opportunity to pull together for the common good,” he said. “Those differences don’t matter when you’re trying to rebuild your lives. I think we’re going to see fractured relationships due to political and cultural differences diminish here for quite some time.”