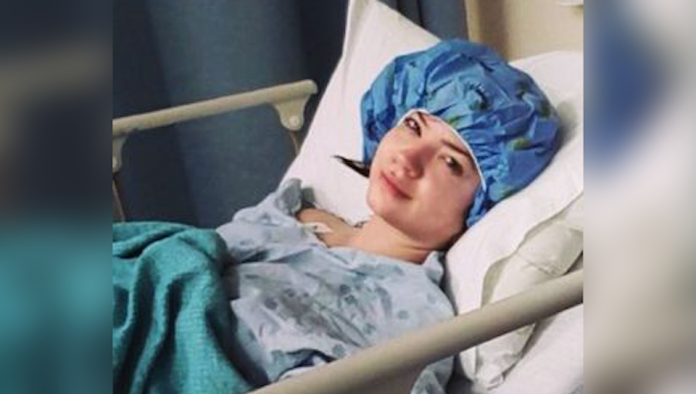 The young woman claims that she had no idea that her organs started to shut down and she was dying for 7 years. Doctors diagnosed her with a rare cell disorder after the 27-year-old woman experienced exhausting symptoms. When she was just 15 years old, the woman began feeling weak and noticed her stomach starting to swell. She also started experiencing frequent nausea. The medical personnel soon discovered that she actually had organ failure and was at risk of dying.

The 27-year-old woman from California, Ivy Adelle, told the Mirror that she first began feeling sick when she was a 15-year-old teenager.

Adelle, who works as an estate agent, said that when she was 15-year-old, she reportedly became very weak and noticed her stomach starting to swell.

Unfortunately, the teen ignored the signs of illness despite experiencing frequent nausea.

The young woman said that she began to panic when she had a period at the end of the school year and the blood was a blackish color.

Ivy Adelle reportedly said: “I was fearful, I thought I had cancer or something was really wrong with me.”

The 27-year-old woman also said that she was initially scared to go to the doctors because it was expensive and she didn’t want to burden her parents. She thought that she was just overreacting.

The same year, the young girl fainted in front of her parents and was rushed to a hospital via ambulance.

The medical personnel discovered that the young girl was suffering from organ failure and was at risk of dying.

Ivy Adelle also said: “I was shocked to realize I was dying and this is what slow death felt like. I felt like I was being punished by life and I wanted to enjoy my friends and family, I was so young. I was told to call my closest friends and family, but I felt very upset and angry as well as numb because I was in and out of pain.”

According to reports, Adelle was reportedly diagnosed with auto-immune haemolytic anaemia along with cold agglutinins disease and antiphospholipid syndrome.

According to the health officials, auto-immune haemolytic disease is a rare red blood cell disorder that produces antibodies to destroy these cells and is coupled with cold agglutinins, as well as antiphospholipid syndrome, which causes the antibodies by mistake.

Unfortunately, the doctors didn’t realize it was caused by systemic lupus, as testing can take several years.

Doctors believed the blood disease to be a result of Ivy’s undiagnosed lupus, combined with severe amounts of stress.

In 2018, Adelle was diagnosed with lupus. She said that she needed a blood transfusion immediately, so she was flown to another hospital.

The young woman also said that her blood disease stayed in remission, but she did get unwell again at 23 years old and it’s taken her many years to recover.

The 27-year-old estate agent said that her lupus flared up severely and she was treated with the wrong drug which caused her to go into anaphylaxis.

She said: “My lupus flared up severely and I was treated with the wrong drug by a medical professional who refused to accept that I had lupus, which caused me to go into anaphylaxis. I couldn’t breathe and had to go to hospital, but then I got my official diagnosis and was put on an intense treatment program.”

Per reports, the 27-year-old woman still suffers with chronic pain and has since developed fibromyalgia which is a long-term condition which causes pain all over the body.

Health officials said that this also causes sensory issues for her skin, so she has to be careful about the clothes she wears and monitor what she eats because of food allergies.

Ivy Adelle told Metro: “I focus greatly on my health and eating, because I am passionate about dietetics and food science, which I thought would be my answer and cure for this – but it wasn’t.

I still have lupus flare ups from time to time, but I am deeply in tune with my body and realize that it’s either the food I’m consuming or external factors.

My goal is to figure out all the factors that trigger this and share my journey with others.”