News WeekOcean Club Party
Home Covid-19 After being diagnosed with COVID-19 and spending more than a month in... 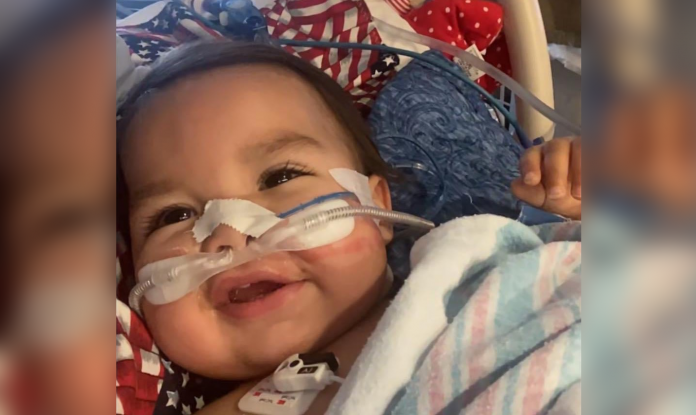 Health officials said the 1-year-old boy is the first baby in the state to be placed on extracorporeal membrane oxygenation for COVID-19. ECMO removes carbon dioxide and sends oxygen-filled blood back in the body, giving the heart and lungs a chance to heal, doctors said. The boy’s mother said that the decision to have her son be placed on ECMO was difficult. But, she also believes that the outcome for him could have been worse if he didn’t have the procedure.

The 1-year-old boy from New Mexico, Matteo Baca, is back home with his family, after spending more than a month at The University of New Mexico Hospital fighting for his life, according to UNM Health Sciences Newsroom.

The boy’s mother, Shannarose Martinez, said her son was diagnosed with COVID in early December after Matteo had tubes placed in his ears for recurring ear infections. The baby was fussy, coughing and developed a fever so she took him to the emergency department, the mother said.

The 1-year-old baby was admitted to the hospital on Dec. 5. His fever was constant. He was lethargic, he wasn’t eating or drinking and his coughing was terrible, the mother said. It would take him 45 minutes for him to recover from coughing.

The mother couldn’t believe that Baca tested positive for COVID-19 because the family was vaccinated and practiced all the recommended safety measures.

At one point, the mother also tested positive for COVID, but her symptoms were mild.

Unfortunately, the 1-year-old boy seemed to get sicker and sicker astonishingly fast. While in the hospital a few days later, the boy seemed to be OK, until he suddenly wasn’t, the mother said.

The boy’s mother, Shannarose Martinez, reportedly said: “He had a coughing fit, his oxygen kept dropping. Before we knew it, he was being moved to the Pediatric Intensive Care Unit. Everything escalated so fast.”

Alia Broman, MD, an assistant professor in the UNM Division of Pediatric Critical Care, discovered that Matteo was sick enough to need a breathing tube and a chest tube.

Doctors discovered that his oxygen saturations were getting worse and the amount of support he was needing to breathe was getting higher and higher. Broman then called in other physicians to conduct the ECMO procedure.

“It’s really a group effort. Everything that goes into putting a kid on ECMO – it’s never something that we decide by ourselves. We’re always talking with the surgeons about whether or not they think the children would be good candidates and (whether) they’ve got a chance of survival, because once you’re going on ECMO, you have about a 50-50 chance of mortality. It’s not 100% guaranteed that you’re going to be able to survive, first of all, getting put on the machine, and second of all, survive coming off the machine.”

The boy’s mother said that the decision to have her son be placed on ECMO was difficult. But, she also believes that the outcome for him could have been worse if he didn’t have the procedure. As she was signing the paperwork for the ECMO procedure, her son’s condition worsened and medical personnel rushed into the room.

But, the good news is that the ECMO procedure was a success. The baby’s oxygen saturation was back at 100%, which it hadn’t been for so long.

On Dec. 20, the 1-year-old boy was taken off ECMO. A few days later, he was gradually weaned from the ventilator, and was completely off of it on Christmas Eve.

The mother expressed gratitude to the hospital staff and to UNM Hospital’s Child Life Center for providing Christmas presents for her children.