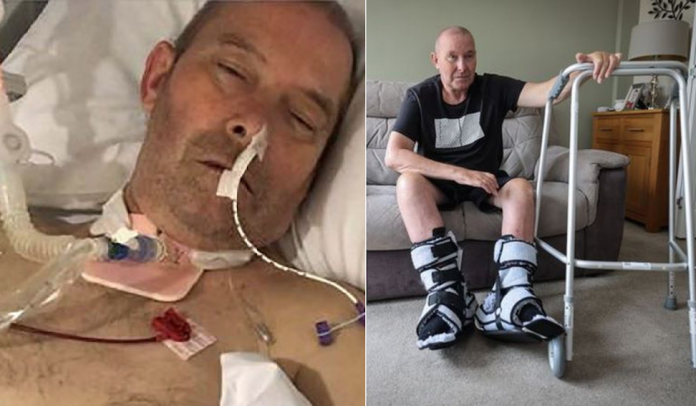 Fit and healthy man says he suffered a rare side effect of the COVID-19 vaccine and spent nearly 14 months in hospitals fighting for his life. The 58-year-old man, who he says had no previous health conditions prior to taking the COVID vaccine, says he will never be the same after being left needing a wheelchair and walking frame to get around the house. The ‘fit and healthy’ father fell sick just days after having his first dose of the vaccine and ended up on a ventilator. The 58-year-old man says he now regrets getting vaccinated against the Coronavirus.

Shingler reportedly suffered severe aches just days after receiving his first dose of the vaccine in March 2021. The father was rushed to the hospital and was placed onto a ventilator. After spending months on a ventilator, he was transferred to another hospital to continue his long and painful recovery.

The 58-year-old man claims that he had no previous health conditions prior to taking the vaccine. Unfortunately, he also said that ‘he will never be the same’ after being left needing a wheelchair and walking frame to get around the house.

During an interview with ST Live, the 58-year-old man reportedly said: “I was asked to make a phone call to my loved-ones as I was taken down to critical care as they didn’t know whether I would make it or not. I spoke to my wife and two daughters and said goodbye. That was frightening. I was then on a ventilator for months recovering. Even though I was the one lying in a hospital bed paralysed, my family went through more than I did.”

The doctors told Shingler that he was suffering from the Guillain-Barré syndrome, which is a serious condition that affects the nerves. According to the health officials, the condition sees the body’s immune system damages nerve cells, causing muscle weakness and sometimes paralysis. When he was taken off the ventilator, he says he couldn’t move his body and could only move his head.

Shingler also told ST Live: “Before this happened, I’d class myself as a mentally-strong person. Nothing could phase me but this was something else, it’s taken its toll on my mental health. I can’t go to work, drive or dress myself. My hands are so bad that I can’t grip anything. I use a wheelchair and have a walking frame I have to lean on. I can’t stand on my own. I wouldn’t wish it on my worst enemy, it’s really bad. I did not like any of it but I am lucky to be alive.”

The 58-year-old father also said that he now regrets following the Government advice to get vaccinated against the Coronavirus. Shingler reportedly said: “It’s life-changing but I didn’t do something that caused this. We just did what the government told is to do. I regret getting the vaccine. If I had known there was a chance of getting this, I wouldn’t have gone anywhere near it. My nerves have been stripped and damaged. This is the beginning and it’s going to be a long haul. I won’t ever be the same Anthony again.”

The 58-year-old dad from U.K. has been awarded a $147,000 (£120,000) tax-free payout after his wife, Nicola Shingler, applied for the Vaccine Damage Payment Scheme in May 2021. According to Nicola, while the amount sounds like a lot, it doesn’t compensate for the pain and suffering the vaccine has caused.