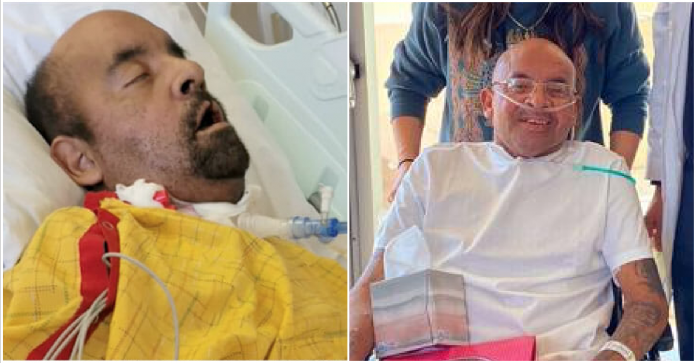 After spending more than 18 months in a hospital, the 43-year-old father-of seven is happy to finally go home after being diagnosed with COVID-19 in September 2020. He started having trouble breathing while at work. He asked his boss for a ride to the hospital and it was there that he learned he had COVID. Since his condition was so poor he was heavily sedated and on a ventilator for the majority of his first year in the hospital.

When asked how it felt to be with his family after so long he was speechless.

In September 2020, the 43-year-old father from New Mexico, Donnell Hunter, started having trouble breathing while at work. He asked his boss for a ride to the hospital and it was there that he learned he had COVID-19.

The father of seven went home, but was back within 24 hours.

“I thought I could just fight it off, but there was no way,” he told CNN.

He returned to the hospital, and initially they believed they could care for him, but they realized he needed care from a larger hospital so he was flown to another hospital.

Since his condition was so poor he was heavily sedated and on a ventilator for the majority of his first year in the hospital.

His wife Ashley was concerned how the virus would affect him because even though he was healthy and active, he had a kidney condition for most of his life, and it was only recently that he had received a kidney transplant.

“I would only cry in the shower. I didn’t want to let my kids see me cry,” she said.

Eventually she told the couple’s five children – Hunter has two older children of his own – that it was okay to be sad.

Over the next several months, Hunter battled a virus that has so far killed more than 6 million people around the world.

When he was moved to a facility in Arizona, Ashley drove the eight hours to spend a week with her husband, and then his mother would travel to see him the following week.

While in rehab, Donnell had to relearn a lot of the basics.

“I lost usage of my hands of my arms of everything my legs so I had to wait for all that to come back and do a lot of rehab speech therapy learn how to eat learn how to swallow I had to learn everything all over again,” he told KOB News.

On March 4, the lucky father of seven came home. Deputies escorted him to his home and a parade of friends and family welcomed him back.

“(My grandson) was the first one I saw, and he acted like he’s known me all his life,” he said. “He was reaching for me, giving me a kiss. It was so awesome.”

While he still has a long road to recovery in front of him, at least he’ll be at home with his friends and family by his side. And he knows this time it’s not a dream. He’s finally home.

“I was like ‘Thank God!’ when I woke up, I wasn’t dreaming, it was real!” Hunter said with a smile across his face. “Because when I was in the hospital I had many dreams that I was home and I’d wake up, and like I said, ‘it was all a dream.’”