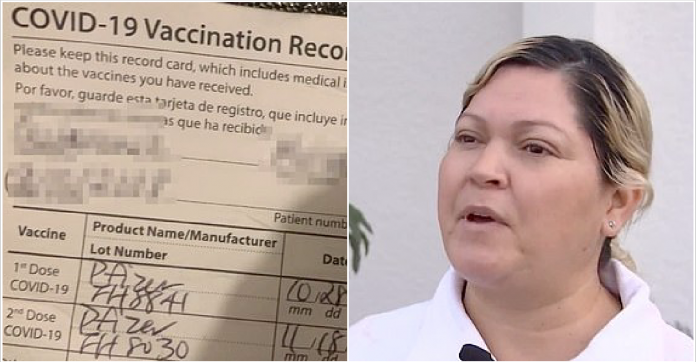 According to the statement, the mother from California said that her 13-year-old son returned home from school with a COVID-19 vaccination card after he accepted the Pfizer Coronavirus vaccine in exchange for pizza. The mother is vaccinated against COVID, but said she did not want her son to receive the shot because he is asthmatic and suffers from allergies, which she fears puts him at greater risk of rare but potentially-serious side effects.

The mother, Maribel Duarte, is now outraged after the area school offered her 13-year-old son free pizza to have his COVID vaccine and then warn the boy not to tell anyone about it.

The mother reportedly said:‘”I should have been involved. The lady that gave him the shot and signed the paper told my son, “Please don’t say anything. I don’t want to get in trouble. And it hurt to know he got a shot without my permission, without knowing and without signing any papers for him to get the shot.”

The vaccination card showed that the unidentified boy had two doses of his Pfizer vaccine, on October 28 and November 18. It is unclear when he told his mother about what had happened after the first or second shot.

The Barack Obama Global Prep Academy is part of the LAUSD, which is mandating all student 12 years and above be vaccinated by January 10.

In almost all California districts, students aged under 18 can only get vaccinated with parental consent.

Students who don’t get the vaccine by the deadline or don’t have a legal exemption will be forced back into virtual learning, according to the state officials.

A spokesperson for the school district said that they could not confirm the incident involving Duarte’s son while conceding that students were being offered incentives to get the vaccine.

Attorney Kennedy is following two cases currently making their way through court against the LAUSD seeking to end the mandate.

She said that the parents may have a strong case because the district does no have the legal authority to enforce a mandate.

Attorney Kennedy reportedly said: “The LAUSD does not have the power to add a vaccine to the California school schedule. You couldn’t do it if you were a podunk school district and you can’t do it if you’re LAUSD, the second largest district in the nation. You don’t have that legal authority.”